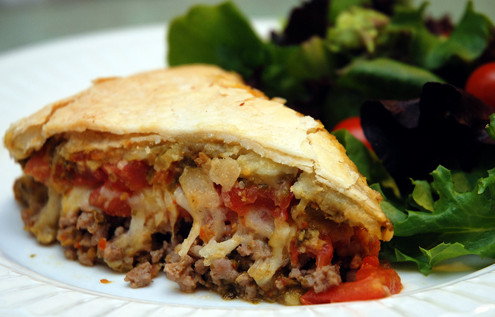 This week marked a big milestone in The Twenty-five Dollar Victory Garden. I officially crossed over the 100-pound mark of harvested vegetables! But what do I really show you to mark this momentous occasion, a big pile of veggies? Nah…how about the awesome tomato pie I made from those homegrown tomatoes that put me over the top? Thanks to my very funny west coast Internet friend I know and love as “finnyknits”.

If it weren’t for her, I wouldn’t know about one of the most awesome meals anyone can ever make with tomatoes! She emailed me to share her version of the recipe she got from her favorite blogger. Finny described it as one of those meals you can’t stop thinking about after you eat it and I have to agree. It was fabulous! I encourage everyone to give this easy to prepare meal a try and you’ll impress everyone that is lucky enough to get a taste. Thanks finnyknits! (By the way, finnyknits was also one of people that provided seeds for my Twenty-five Dollar Victory Garden so it only seems fitting that I share this milestone occasion with her in some way).

Back to the garden; When I took on this project, I had no idea how much would come out of my little 240 square foot garden based on weight. All I knew is that it had to produce enough food to keep my family of four supplied with all their summer vegetables. Well, I’m here to tell you, 100 pounds is more than enough! Most of the time, the production outpaced the consumption in my house, which gave us the pleasure of sharing the excess with friends, neighbors and especially the local shelter.

But now that summer is winding down and school kicks in this week, I suppose in the near future, I’ll declare “victory” in my little 30’ x 8’ garden. Like many people across the country and especially the east coast, my garden has suffered in these last few weeks. It’s now a constant race to keep ahead of the diseases that are gaining a stronghold on many of my tomato plants.

And just for the record, this is NOT the official “wrap” on the Twenty-five Dollar Victory Garden Project, …just a late season update to share with you my excitement of breaking through an important milestone while realizing that things really are winding down. Who would have thought a total investment of $15.05 would yield a harvest of over 100 pounds that is still going strong?

Once I do make my official victory declaration post, I’ll post a final video to summarize the entire story. That should be fun and I expect to have that ready within a couple weeks, when I finally do tally up the numbers on a pretty darn successful and very fun project.
JL