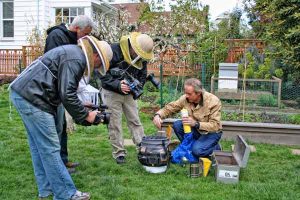 Take time to study any living creature and you’ll be amazed at what you learn, from the highly sophisticated dolphin, down to the lowly worm. But if I had to pick just one that fascinates me the most, I’d have to pick the honeybee. For our episode on honeybees, we spent time with three well-known Seattle experts.

First up was Corky Luster, a Seattle area urban backyard beekeeper. There’s been a huge increase in the popularity of raising bees in an urban setting, so we brought our cameras along to follow Corky to his own backyard, and then along for a day in the life.

Fortunately our segment included the demonstration of an active hive. While I suited up, Corky’s gloveless hands began dismantling the hive to give the cameras a shot of the inner-workings. To our good fortune, we were able to find the queen and demonstrate her large and unique shape compared to her drones and worker bees. In spite of not being happy about this cold weather intrusion, the bees were on their best behavior and Corky’s hands avoided being stung even once. 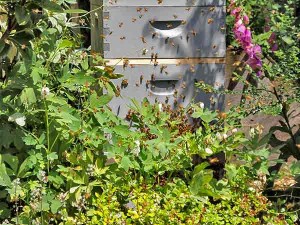 From there it was off to our good friend Robin Haglund’s home. Here fabulously designed landscape was the perfect setting to show off her newly established hive and discuss a few plant choices that are best for attracting and keeping honeybees happy and close to home. Robin’s hive had been installed about a month earlier but the bees seemed well adjusted and very active. (As a side note, one of the best parts of visiting Robin’s home was the incredible spread of fresh veggies, local cheese and other tasty treats she had laid out for us to snack on during our time with her).

Between the dodging of rain showers and cold temperatures, we managed to complete our segment and move on to our last stop of the day: a large rooftop garden above Bastille’s restaurant in the trendy urban neighborhood of Ballard. Our small army ascended to the roof where award-winning, Seattle based landscape designer, Colin McCrate was ready to show off his very cool, all-season garden. 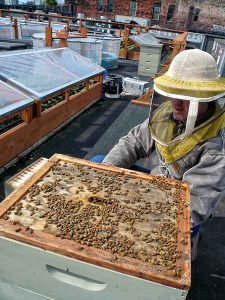 Corky tends to the beehive on the rooftop garden of Bastilles

Bastille’s owners wanted a garden over their restaurant that could feature fresh rooftop- grown salad any day of the year. Colin’s charge was simple—make it happen. And did he ever. His 600 square foot raised bed garden has double irrigation lines to keep the soil cool in the blazing heat of summer, as well as embedded heating cables to keep it toasty warm and productive, even on the coldest winter days. In addition, Colin crafted replaceable covers for each raised bed. In winter, the plastic frames act as a greenhouse to retain the heat. But in summer, those covers are replaced with identical frames of shade cloth. That allowed those cool-season greens to keep on going, without the risk of bolting.

And to tie the show together, this garden had honeybees too. In addition to harvesting 40 to 60 pounds of honey from each hive that Bastille’s uses in their freshly prepared desserts, the bees are there to pollinate the summer crops like squash, tomatoes and cucumbers.

By day’s end, we descended from the cold, windy rooftop to a large round table in the bar area to toast the day and get better acquainted with our new friends from Seattle. Unfortunately, we didn’t stay around long enough to experience the restaurant dessert special using the rooftop honey from Corky’s hives. Which only means I have yet one more reason to come back to Seattle…like I really needed one!