I knew sooner or later we’d branch out beyond the contiguous 48. I mean after all, we are Growing a Greener World, right? So when Nathan called with an idea to shoot an episode in Dominica, I couldn’t believe my ears. On occasion, I’d find myself thinking about where we’d go to film if we ever left the country. Two places kept coming to mind: Costa Rica and Dominica.

Dominica is a beautiful, small island in the Eastern Caribbean (click for full size).

Most people are at least familiar with Costa Rica, but not many can tell you anything about the other. A quick search on the web will turn up two main things about this small island nation: Pirates of the Caribbean II was filmed there, and – more importantly for us – they’re known as the Nature Island of the Caribbean and are making huge strides towards nationwide sustainability.

As it turns out, Nathan was approached about doing a celebrity chef appearance / fundraiser to promote the protection of sea turtles on the island. I told him the only way he could go, is if we came along too. 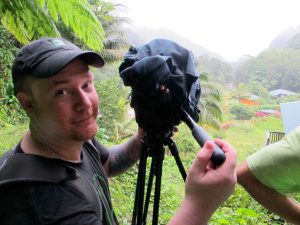 My shooter buddy David Pennington filming in the rainforest. We loved Dominica but the equipment didn't appreciate the moisture.

Going to a foreign country can be a daunting task for anyone. But when you add a television crew, tons of equipment, permits, licenses, etc. I started questioning if it was worth it. Thankfully, from Dominica’s side, they helped facilitate our arrival, permitting, immigration, itineraries, and all we needed for a smooth and productive trip. But even they couldn’t help prepare us for the unpredictable. So, here are a few of the things we learned behind the scenes while filming this episode in a foreign country: 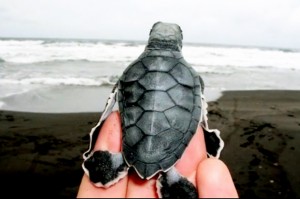 And one last behind the scenes tidbit—if you watched the show, the sea turtle segment was never written into the original outline. But we found it to be such a fascinating story and so important to the bigger message of Growing a Greener World, we just had to include it. It was one of those one-take, impromptu moments but we love how it worked out. It’s a great story and the owners of Rosalie Bay Resort should be commended for their conservation efforts of these majestic creatures. We applaud and thank you!