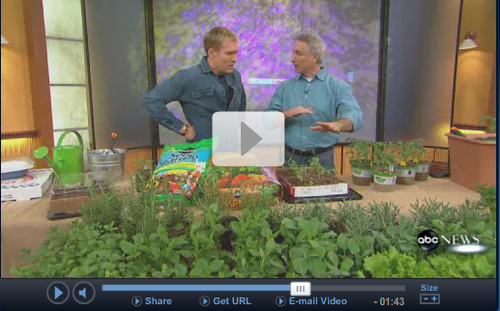 What a great day for a little positive gardening PR. Thanks to so many of you writing, blogging, tweeting and basically shouting about all the important benefits of gardening, the world is starting to finally hear us. Sure, it doesn’t hurt to have Michelle Obama breaking ground for the new Victory Garden on the White House lawn. But I’d say it’s about dang time somebody at some level high enough, does something to actually make gardening a newsworthy event.

So for whatever reason, on Tuesday, Good Morning America wanted a segment on growing your own vegetable garden. Two days later, a six-minute segment about how to start and grow your own groceries on the cheap, is in the can. I’m writing this post from the airport, still trying to recover from the blinding pace at which this happened. On Tuesday, having just returned from a working weekend in San Francisco, I thought I was home for a few days, and thankful to catch up on some much needed office and family time. But this was not to be. Next thing I know, I’m packing my bags and props for my $25 Victory Garden segment. GMA loved the idea of the “gardening on a tight budget” idea, and were more than willing to make this a feature of the segment.

Two days later, I’m heading home from the Big Apple and feeling really good about the genuine interest the GMA producers and hosts had in creating this food garden segment. In addition, while at the studio, I was approached by numerous behind-the-scenes folks, politely barraging me with gardening questions. I was thrilled. What’s happened? I’ve done gardening segments before, but never have so many people approached me with such a genuine interest in wanting to know more!

I am greatly encouraged to feel like we are finally getting through. So, keep up the great work everybody. Gardening is important, especially now. We have a story to tell and finally an audience that will listen.
JL

Tomorrow, I’ll share pictures and stories of my bounty of free seeds and supplies sent to me from friends I’ve never met, all around the country. By the way, the official expense to date is hold at seven dollars. That was for two bags of seed starting mix.