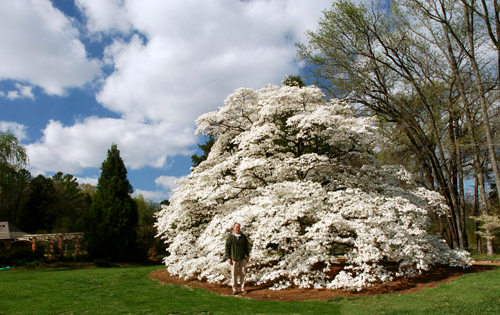 Hello all. We interrupt my quest for the Twenty-Five Dollar Victory Garden to let you know I'm on the road until the end of this week. Before I left I made sure everything was taken care of in regards to my emerging garden, currently in the stage of seeds and a few seedlings. As long as the cat stays away (big question mark), things should be alright until I get home. By then I expect to post another video or even two if I have time, since they've already been taped.

This past weekend, I had the opportunity to address the Alabama Master Gardeners at their State Conference in Huntsville. They had a huge turnout and the event was outstanding. When I arrived on Friday afternoon, I had the pleasure of touring the Huntsville Botanical Garden with Harvey Cotten, Chief Operating Officer. Overall the garden was spectacular but the highlight was the most beautiful and grand dogwood I have ever experienced. She's a very famous lady and I was very fortunate to catch her in full bloom. It was truly a breathtaking sight. In this picture, note that Harvey is standing in front of her. He is six-feet tall.

This majestic dogwood is the native Cornus florida. She's well over 100 years old and was moved here in 1995 from an estate when the city was widening a road. She was standing dead in its proposed path. Fortunately, The HBG was ambitious enough to take on the challenge of saving and relocating her to the garden. An 18 foot rootball was dug and the 90,000 specimen was loaded onto a house moving trailer for the five mile ride to her new home. Rather than digging a large hole for her new place of honor, they simply placed the rootball on top of the existing berm and brought in massive amounts of soil to cover her roots. She's bloomed faithfully like this every year, and has great fall color and fruit. Put a trip to see her on your bucket list as this is a must-see!

Today I travel to Toronto to scout the site of a community garden I will design and oversee installation of in May for Fiskars Project Orange Thumb. Then it's on to New York City for another round with GMA-Health to talk about the health benefits of gardening and growing your own food. The bonus is we'll talk about the Twenty-five Dollar Victory Garden as the basis for the six minute segment. I'm still a little foggy on the air times but I understand it will be on the 9th, possibly during the ABC News. I'll let you know more about this when I get more details.

Stand by for another video and more updates very soon.
JL