*Joe’s Note: Presumably, you’re picking up here from the previous post where I wrote about our visit to Annie’s Annuals for the taping of an episode featuring her nursery and all the unique and cool things she does to make it so well known across the country. But there’s one thing you probably don’t know about Annie’s when you admire her catalog or walk through her nursery… 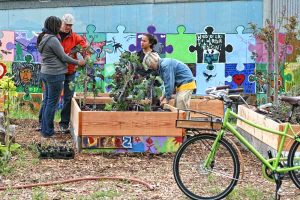 There are a lot of unique features that set Annie’s Annuals apart from many other retail and mail order nurseries: her focus on heirloom and hard-to-find specialty plants, that every plant she sells is started on site from seed, and that they’re all sold in four-inch pots. The plants thrive and grow up quickly—sometimes too quickly.

But what’s unique here is that for the plants that outgrow their small pots, before they’re sold, Annie and her staff don’t bump them up to larger containers and sell them at a higher price. Instead, she donates many of them to shelters, schools and community garden programs. And her program of choice: Urban Tilth. As we learned more about Annie’s attraction to them, we too were drawn to tell their story as part of our feature on good people doing go things for others.

Under the direction of Doria Robinson, Urban Tilth is an organization in Richmond, CA committed to training local youth and adults in the skills necessary to grow their own food. They have a range of K-12 urban agricultural programs and also offer free workshops to the community on gardening and sustainability. One of their projects is a series of community gardens they maintain along a bike path green space. But these gardens take a whole different approach to the word “community”. There are no fences here and the youth of the town maintain the food plots so that the people in the community can harvest anything they want at any time. 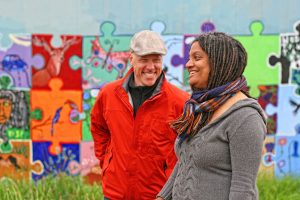 One thing struck me in particular. Adjacent to the plot of raised beds where we interviewed Doria was a large, colorful mural, spanning the side of an entire building. I was surprised that it was still in pristine condition, unmarred by graffiti or “tagging”, an all too common occurrence of local gangs of which this wall and mural were prime targets.

When I inquired about that, Doria too shared her surprise but also offered her philosophical reasons as to why she suspected in the three years this mural has been there, it has remained unscathed. “The mural was part of the garden and the garden was the one thing in this community that unified its members. Here, territorial boundaries or turf wars ceased to exist. Where blocks away, one dare not go, here, the garden was a draw to young and old, and where race, gender or religion seemed not to matter”. In fact, Doria suspected that each person that had the opportunity to encounter this garden, claimed a personal connection to it, and therefore would do nothing to alter the peace each found from being a part of it.

I’d say she’s exactly right. The power of a garden is an amazing thing; and so are the people that make them possible.