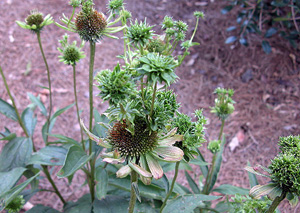 Leafhoppers are the most common source of  “Aster Yellows”

An email arrived recently with several accompanying pictures. It was a simple question: “Can you describe what my Echinacea (purple coneflower) is up to and how to prevent it in the future”?

The pictures documented a classic display of the symptoms of “Aster Yellows”. Purple coneflowers display some of the most dramatic evidence of this non-fatal, but potentially prolific disease. Secondary flower heads emerging from primary flowers can be a common sight. However, Aster Yellows is a disease that affects over 300 species of plants including herbaceous ornamentals, vegetables and even weeds.

Symptoms of Aster Yellows develop most quickly and are more severe when temperatures are warm. In cooler temperatures, plants may be infected without any visible indication. Unique symptoms also vary between plant types. Symptoms common to most infected plants include yellow foliage, stunted growth, flowers that remain on the green side, and an overall distorted look.

Controlling Aster Yellows is challenging. There is no known cure for the disease, and chemical control of the vectoring leafhopper is usually not effective and therefore not recommended. The best means of control for this problem, as well as many other garden diseases is good sanitation. Remove and destroy any infected plants you see immediately. This includes all weeds, since they can be a common host source for this disease.

Lastly, not all plants are susceptible to the disease. Most woody shrubs seem to avoid the problem as well as a few herbaceous plants such as salvia, geraniums and impatiens. Choosing resistant plants and removal of infected plants are the best control methods for controlling Aster Yellows in the home landscape.