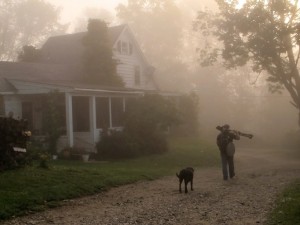 Before this season started, there was one episode I was most excited about shooting and this was it!

I didn’t even know if such a place really existed but somewhere in my mind, I was sure there must be working farms where wanna-be organic farmers go to learn their craft. We just had to find it. And it didn’t take long. A quick entry in Google for “farm school” revealed several viable hits. But when the first listing that comes up has the domain farmschool.org, we felt pretty confident we had found our place. 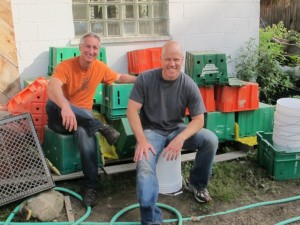 My vision from the start was to embed myself, co-host Chef Nathan Lyon, and co-executive producer Theresa Loe into the school for a number of days, bring the camera guys, and just start filming everything – from the 4:00a.m. alarm, to the milking of the cows, harvesting of the crops, mucking the stalls and whatever else takes place in a typical day of life on the farm. Until our heads hit the pillow at the end of the day, I wanted to document everything. We could figure out editing later. Call it a cross between Survivor and The Apprentice; this was going to make for great TV.

Theresa contacted the school and told them what we had in mind. They couldn’t have been more accommodating. After a few logistical details were worked through, the Farm School in Athol, Massachusetts had three new, albeit short-term students. 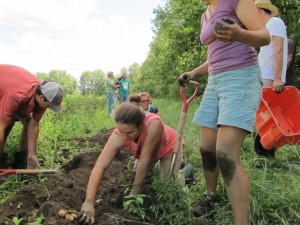 Harvesting potatoes with the other students at The Farm School

After months of enthusiastic anticipation, we finally arrived to the farm on a glorious September afternoon. The first order of business was to claim our space in the bunkhouse, throw our bags on the plastic-covered mattresses and track down the rest of the student farmers. We met up with them just as they were wrapping up the second of two chicken slaughters they have to do as part of their training. Honestly, I was relieved to have missed this part. No, I’m not a vegetarian, but what little meat I do eat is usually chicken. Yes, I realize that chickens and other animals living on an organic farm like this have a pretty great life, and only one bad day. Knowing that makes me feel a lot better. But to actually see the slaughter is something I’m still not ready for and gladly, this time, being late was actually a good thing. 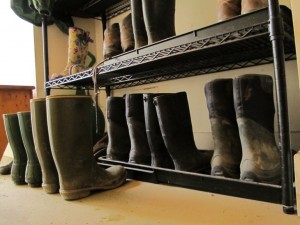 Getting dirty is the only way to learn!

In spite of the rather odd location for introductions, this was our first official meeting of our fellow farming students. It was an interesting mix. Most of the 12 that are enrolled for the entire year were either recent college graduates or simply taking a break from the academic rigors of the classroom. Yet when it comes to work, discipline and demanding schedule, the farming life requires that and more. And then there was Betsy; a female, fifty-year-old rabbi on sabbatical. She could have been any of the other farmers’ mother. Perhaps it was our similar age that allowed us to bond so quickly, but whatever it was, I liked her from the start. No one worked harder than she. I loved watching her take on every task with such enthusiasm and joy. She didn’t have to be there, but she worked her butt off every day and all the while, provided so many sage moments of wisdom as she took us under her wing for our short time together.

Spending a few days embedded in the organic farming life was amazing. The days are long and the work is hard. But the end of each day is an extra special time when everyone sits around the communal table, enjoying the fruits of their labor, breaking bread with like-minded colleagues, sharing great conversation, laughter, and moments of reflection. 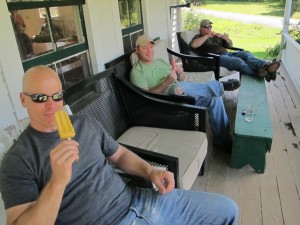 When I asked one young farmer why she chose to do this work, she paused, thought for a moment and delivered a reply that I believe summarizes the feeling I got from so many people we worked with during this shoot and elsewhere when covering this topic. She responded with an ease and confidence that I’ll never forget,

“Knowing the work you’re doing is important, providing fresh, organically grown food for others while respecting the land and protecting the environment… well, there’s just nothing wrong with that.” It was a great reminder to me for why we want to help cover this movement and tell their story.

There’s one correction to the above. As hoped, Theresa Loe was scheduled to join us as a student for life on the farm during this shoot. Unfortunately a change in plans precluded her from being able to make the trip. But I wanted to leave that part of the story in since she was such a part of the original planning and SO wanted to be there!