There are ecological superheroes at work in our midst. But, like all great superheroes, bats are misunderstood and in jeopardy. As they fly through the night skies, bats save U.S. farmers over $23 billion annually. Yet, many in our culture are completely unaware of their benefits – or the dark force which has risen to threaten the very survival of their species. 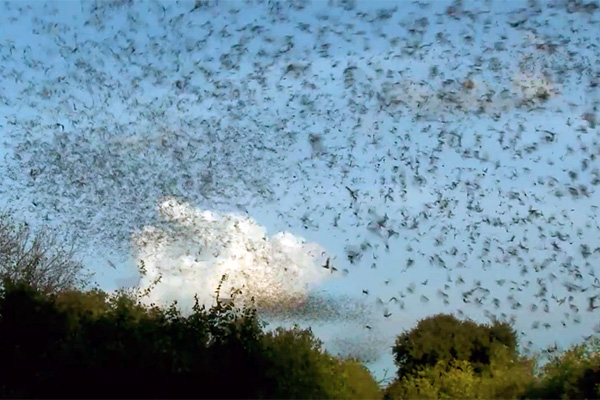 Bats streaming through the skies at sunset after emerging from Bracken Cave.

Just outside of San Antonio, Texas; Bracken Cave is the migratory home to over 20 million bats. They emerge, shortly before each sunset, as a powerful force for local agriculture and a jaw-dropping aerial display – so immense it’s visible on doppler radar. These amazing mammals can fly hundreds of miles in a single night to hunt the insect pests which might otherwise decimate area farm crops.

Further north, over a million bats depart through twilight from underneath the Congress Avenue Bridge of Austin, Texas. Every evening from March through October, tourists watch in awe as this important colony of bats streams over Lady Bird Lake en route to surrounding corn and cotton fields. These hunting flights save the region’s farmers thousands in pesticide expense alone.

Appreciation for the ecological beauty of these creatures is on the rise, but in the depths of their caves, White Nose Syndrome attacks bats around the world as they hibernate. This fungus has already caused a 99% decline in bat populations in some areas. Fortunately in this battle of good versus evil, science has discovered a reason to hope for the future of bats.

Scientists have been working to identify a solution for the devastating White Nose Syndrome. This fungal disease is quickly decimating bat populations across the globe. Here a scientist examines a pair of bats in hibernation. (Credit: Kennesaw State University)

Settle in for an awe-inspiring look at these tiny animals, the extreme measures being taken to preserve their species, and the ways these powerhouse hunters can go to work in any home garden. Each of these creatures is small, but their collective actions are colossal and transformative. The same could be said of our choices, as we each take our individual steps to grow a greener world.

Bat House Constructed in the Episode