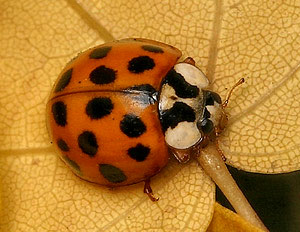 They’re everywhere! Crawling out of cracks around the windowsills, huddled up in the corners of the ceilings in the brightest rooms, warming themselves on light fixtures, there’s one now flying past my ear towards the light. It’s an invasion of multicolored Asian lady beetles that’ve been rejuvenated by the recent warm temperatures.

The multicolored Asian lady beetle, Harmonia axyridis, is a native of Asia and relatively new to Pennsylvania (first observed en masse sometime around the fall of 1993). As with nearly all lady beetles, it is a highly beneficial predator on a variety of insect pests, especially aphids, in food crops, trees and landscape plantings.

Trouble occurs when populations build up, and large numbers of beetles enter houses in the fall to hibernate. During unusually warm winter days and in early spring, the beetles wake up and crawl into the warmer rooms of the house where we usually hang out.

Multicolored Asian lady beetles enter the house through small openings around doors, windows, and other cracks and crevices. In addition, they can enter through siding gaps and attic vents. Sealing those entry points is the best method of keeping Asian Lady beetles and other pests from entering the home. Use a high-quality silicone caulk to seal all cracks.

After the beetles have gained entry, the use of insecticides is not recommended, except for severe cases. To remove beetles in the home, use either a broom and dustpan or a vacuum cleaner. When using the vacuum, be sure to change the bag to prevent escape of the collected beetles.

We may get a little confounded when there are hundreds of multicolored Asian lady beetles to clean up, but other than that, there’s no real cause for alarm. I wouldn’t go around squashing these beetles, they emit a pungent, yellow defensive chemical that can stain walls and counter tops (and T-shirts). One other thing, sometimes multicolored Asian lady beetles bite skin. I know. One bit me once. It hurt. Really. (More often than not this stinging sensation is caused by tiny spurs on their legs as they move along trying to figure out if your skin is a food source or not.)

(This article was previously published in the Allied News, Grove City, PA on February 16, 2005)