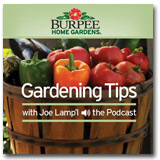 Some of the most rewarding and productive crops in your garden are also some of the easiest to grow. Their growing season can span much of the year. In addition, they don’t require as much sun, they can be harvested quickly, and after harvest, they keep coming back. They’re the leafy crops like lettuce, kale, collards and spinach. From seed to harvest, they only require a few weeks. In this podcast, Joe Lamp’l tells us why we should all be growing these incredible plants in our gardens.

Some of the most rewarding and productive crops in your garden are also some of the easiest to grow. Their growing season can span much of the year. In addition, they don’t require as much sun, they can be harvested quickly, and after harvest, they keep coming back. It sounds almost too good to be true, but it’s not! They’re the leafy crops that we should all be growing,  such as lettuce, kale, spinach and collards. From seed to harvest, they only require a few weeks.

I recently spent some time at a farm school in Mass where we enrolled as student farmers for our television show. On our first morning in the fields, we were harvesting massive amounts of baby bok-choi, mustard greens, purple kale and arugula. The rows were lush and healthy. And the amazing part was, just six weeks after planting from seed, this was the second round of harvesting!

And that’s one of the best parts about growing leafy crops. Since you’re not waiting for these plants to produce any fruit, the harvest comes much more quickly. And since the part you eat are the leaves, they’re always going to produce more. The key to getting multiple harvests from plants such as these is to cut the leaves so that you leave enough of the growing tip behind. That’s the point at which new leaves emerge from the plant’s base.

An easy way to avoid any problems like this is simply to harvest from the outer most leaves. And that’s one of the other advantages to growing leafy crops. They’re edible any time. When you harvest early in their life cycle, they’re known as micro-greens in the food trade. Although it’s all the rage in restaurants, micro-greens are just the leafy crops that have been harvested while they’re young and tender, sometimes just a week or two old.

Here’s another incentive for harvesting leafy greens early. The younger they are at harvest, the sweeter they’ll taste. In fact, if they’re allowed to go to seed, which is that point after their flowers emerge, they’ll likely be too bitter, and the plants will cease to be productive.

The mix we harvested at the farm was combined into one large bin. The ease of cutting and tossing the combination of crops into a single container not only made the job easier, but the real joy happens at the table. The rather random blend of various micro greens is known as mesclin and you’ll often find it packaged that way in the produce section or on restaurant menus. But no matter where you get it, the vibrant explosion of flavors and textures is pure joy to the palette. Although I have to admit, assuming you’ve grown it organically, if you’ve never sampled a taste of your harvest while in the act harvesting, you’re missing one of the greatest joys of tasting and gardening.

And speaking of samples, if you like this episode, it’s one of 26 Burpee Home Gardens Tip of the Week Podcasts. From planting to harvest, every episode is created to guide you to a more successful and enjoyable gardening experience. You can subscribe for free in iTunes, or listen online at Burpee Home Gardens dot com where you’ll also find lots of other ideas and inspiration too!   You can subscribe to the series for free in iTunes, or listen online at Burpeehomegardens.com, where you can also find great ideas and inspiration any time.