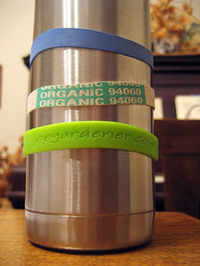 This weekend I ran into some good friends at Greenfest in D.C. Anneliese Valdes and her brother Geoff were there showing off my favorite weeding tool (the CobraHead) to eco-conscience and savvy consumers. We had a nice but brief visit, but I made sure to give each of them one of our cool and totally green joegardener.com wristbands.

This morning, I received an email from Anneliese thanking me for the band but admitting she’s not much for wearing them around her wrist. However, she did offer up an alternative that she has found very helpful. When placed around her water bottle, it keeps it happily in place in her backpack pocket, rather than sliding out at will (like mine did on an airplane overhead bin. The lady’s head that was the recipient of this falling object was not the least bit amused…but I digress). Anyway, did I say wristband??? I meant “bottle band”. Yeah, that’s it, bottlebands! Get em’ while they last folks.

But seriously, if you want one of these bands for wherever you put it, just let us know and we’ll send it to you for free. The other side of the band, and more importantly, says, “growing a greener world”, and that’s the real message.