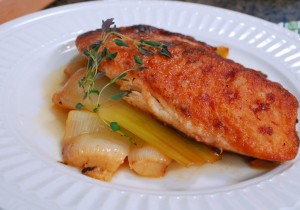 Season the cut side of the leeks lightly with salt and pepper. In a medium sauté pan (large enough to accommodate the leeks), over medium heat, add 1 tablespoon olive oil, plus 1 tablespoon butter, and heat until the butter just begins to brown. Add the leeks, cut side down and cook, undisturbed, for 3 minutes, or until nicely caramelized. Using tongs, flip the leeks. Continue to cook until caramelized, 1 minute. Stir in the white wine and cook down for 2 minutes, then add the stock. Add the thyme and bring to a simmer. Reduce the heat to low and cook until the leeks are beginning to soften and give when pressed, approximately 15 minutes.

Squeeze in the lemon juice, and reduce the liquid until thickened to ¼ cup, approximately 15 additional minutes. Season to taste with salt and pepper, discard the thyme sprigs, and cover and keep warm.

While the leeks are braising, pat the filets dry and then season them lightly, on both sides, with salt and pepper. On a large plate, sprinkle over the flour, then dredge the fillets in the flour, patting them lightly to remove any excess.

When the braising liquid (leeks) is reduced to approximately 1 cup, combine the olive oil and butter over medium-high heat in a large sauté pan until the butter begins to brown. Carefully add the fillets, and let cook for until nicely browned, approximately three minutes. Using a wide spatula, flip the fillets, and continue to cook for an additional 2 to 3 minutes. The fish should look opaque, and just begin to flake, but still be moist. Squeeze the lemon juice over the fillets, then serve immediately on a bed of the braised leeks (with tasty braising liquid).