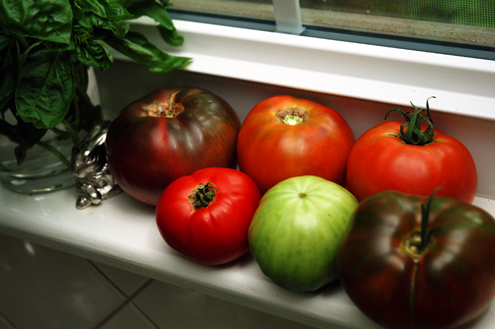 Things have slowed down a lot in my garden. That explains why the posts are less frequent lately. It also has a lot to do with my lack of motivation to get another video out there. I simply don’t have much to show you.

As you know from the last post, my squash and cucumber plants are long gone. Now, I’m counting on tomatoes, peppers, pole beans, chard and Malabar spinach to supply my family’s veggie needs and cross over 100 pounds of harvest for the season.  Fortunately, I’m pulling off a few tomatoes nearly every day. If I’m lucky, they last long enough on our windowsill to allow all four of us to enjoy them. However, that’s become a challenge since my oldest daughter Rachel eats two or three tomatoes for breakfast every day! 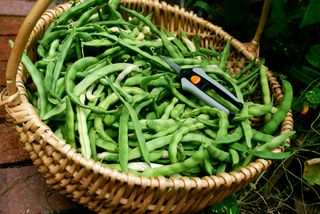 I made a big dent in the 100-pound goal the other day when my youngest daughter Amy and I spent almost an hour picking pole beans. The more we looked, the more we found. We managed to pull off about seven pounds. Clearly this was way more than we could eat, and I didn’t have the energy to string them all anyway. So with great satisfaction, we hopped in the truck and drove them straight to our local shelter where I was told they would be cooked that very night.

The typical late season challenges of keeping ahead of the tomato fungal diseases has me picking off plenty of infected leaves every day. Hopefully I’ll be able to keep enough leaves on the plants for the necessary energy that needs to take place. As of today, I’ve harvested 91 pounds and anxiously awaiting the 100-pound milestone.