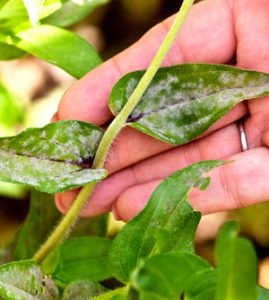 Judging from the number of questions I get every summer about the plant fungus known as powdery mildew, I’ve learned three things over the years; it’s everywhere, you don’t like it and you want to know how to get rid of it. So, here’s what you need to know to prevent, control and even eliminate it after it appears.

Powdery mildew is one of the most widespread and easily identifiable plant fungal diseases. From vegetable gardens to rose gardens, ornamental trees and shrubs, almost no type of plant is immune.

If you find that some of your plants or trees have powdery mildew, don’t worry. This fungus is host specific, meaning just because you find it on one plant species, does not make it a threat to other type plants in your landscape. Although there are many different species of powdery mildew, the symptoms all look about the same from one to another.

What to look for

You’ve likely seen it many times. White or gray powdery spots appear, often times covering most if not the entire leaf surface. It’s also found on plant stems, flowers and even fruit. Fortunately, the symptoms of powdery mildew are usually worse than the actual damage. Rarely is it fatal to the plant.

Advanced stages can cause plant foliage to yellow, curl or turn brown and eventually cause the plant to defoliate prematurely. On flowering plants and trees, the fungus can lead to early bud drop or reduce the flower quality.

· Site plants where they will get sufficient light of six hours or more each day. Minimize shade and trim trees and shrubs that block the light.

Should you find the need to react to an existing condition of powdery mildew, early detection provides the best way to contain and potentially eliminate the problem. There are many commercial products that are effective at containing the spread. However, eliminating an existing problem is not a given.

Most conventional products are made for prevention and control, not elimination of an existing infection. That’s why it’s important to start a control program before powdery mildew occurs or at least at the earliest sign of detection.

There are many retail, off-the-shelf fungicide products that are effective at treating mildew. One of the most common active ingredients used for control is “chlorothalonil”. Although effective, it coats the leaf surface with a white milky film that is quite noticeable.

Baking Soda (sodium bicarbonate) -This is possibly the best known of the home-made, organic solutions for powdery mildew. Although studies indicate that baking soda alone is not all that effective, when combined with horticultural grade or dormant oil and liquid soap, efficacy is very good if applied in the early stages or before an outbreak occurs.

Use this recipe to make your own solution—mix one tablespoon of baking soda with a teaspoon of dormant oil and one teaspoon of insecticidal or liquid soap (not detergent) to a gallon of water. Spray on plants every one to two weeks.

Mouthwash – If it can kill the germs in your mouth, certainly the fungal spores of powdery mildew are no match. And that’s the premise. Generic, ethanol based mouthwash can be very effective at control. Tests using one part mouthwash to three parts water worked for well for Jeff Gillman, Ph.D and Associate Professor at the University of Minnesota, Department of Horticulture. Just be careful when mixing and applying mouthwash as new foliage can be damaged.

Vinegar – Similar to mouthwash, the acetic acid of vinegar can control powdery mildew. A mixture of 2-3 tablespoons of common apple cider vinegar, containing 5% acetic acid mixed with a gallon of water does job. However, too much vinegar can burn plants but at the same time, higher concentrations (above 5%) are more effective.

Sulfur and Lime/Sulfur – Direct contact by sulfur prevents disease spores from developing. When mixed with hydrated lime, the solution will penetrate leaves for even greater effectiveness. A widely available version of this combination includes copper sulphate and hydrated lime, known as Bordeaux mix. However, all of these solutions can burn plant tissue and is damaging to microorganisms in the soil and harmful to beneficial insects. It is also considered moderately toxic to mammals and humans. Use sparingly and with caution if at all.

Milk – The latest player in the fight against powdery mildew is milk. It’s not clear yet why it works so well, but it is believed that naturally occurring compounds in the milk are at work to combat the disease while also boosting the plant’s immune system. One experiment showed good results by applying a weekly dose of one part milk to two parts water.

Water – Ironically, dry conditions and high humidity are the most favorable conditions for powdery mildew to form. But straight water is its enemy because it washes off the spores before they have time to embed. However, water isn’t something that I promote for control because wet foliage is friend to many other plant diseases. If you’re going to try this option, do so early in the day so foliage has time to dry out quickly.

Neem oil – This is a readily available organic option to disease and pest control. Neem oil is extracted from the neem tree, native to India. This is an effective disease control and a broad spectrum, natural insecticide that is kinder to beneficial insects and mammals. As for controlling powdery mildew, results vary but it is not the best option. Results are usually moderate at best.

Even with many choices for control, prevention is still the best medicine, not only with powdery mildew, but with other diseases as well.

6/29/15 Update: Comments are currently turned off for this post due to the volume of questions and answers already included. Please scroll down and you will likely find your question and answer listed below. Thanks!