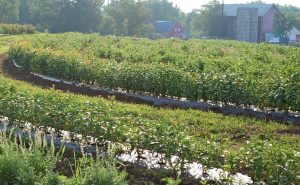 Thanks to the help of many of our friends throughout the country, we learn about some of the people, places and organizations we feature on Growing a Greener World. We knew we’d be doing an episode on community supported agricultural (CSA) co-ops this season. The challenge was in deciding on which to feature. Thanks to our friend, Laura Brandt, we discovered Honey Brook Organic Farms, New Jersey’s largest and one of the oldest certified organic CSA’s in the country.

Another challenge for this episode was in deciding what to leave out. CSAs are a fascinating concept for both the member and the farmer and when it works, it really works. In addition, there are lesser-known variations on the traditional CSA that we wanted to feature as well. With only 16 minutes to tell our story, and three different locations, we had our work cut out for us.

Our first stop was Honey Brook. Husband and wife owners, Jim Kinsel and Sherry Dudas manage their 3,000 plus member CSA like a well-oiled machine. The membership numbers are staggering, but after 20 years of practice, it’s clear they have it down to a science. What was so impressive to me during our visit to Honey Brook was the sheer amount of produce you walk away with each and every week during the growing season. Even though we weren’t even at the peak of tomato season, an average weekly haul ranges between eight and twelve pounds. Add to that the melons, squash, cucumbers, potatoes, herbs, flowers, etc and you’re easily set for the week. 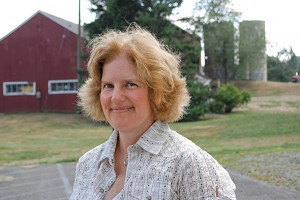 Sherry tells me the average cost to belong to their CSA is about 35% of what a similar purchase would be at the grocery store; and that’s assuming you could even find it all as certified organic. Not only is it unlikely, but you can be sure anything from the store wasn’t harvested that morning, as we witnessed upon our sunrise arrival to the farm. Produce still wet with dew began filling the tables for the flood of members that would start arriving within the hour. While Sherry manages the members and organizes the store for pick-up each day, as farm manager, Jim keeps the crops growing strong and healthy. And on pick-up days, the members flood the market stand and moms with kids of all ages roam the you-pick and cutting fields to add to the bounty. 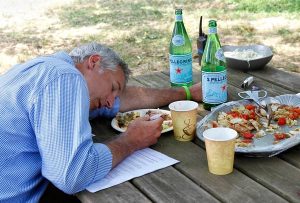 Now that my stomach is full it's time for a nap

As much as I loved spending time on the farm, the real highlight for me was the lunch! You don’t have to know me long to learn that the way to my heart is through my stomach. And today, thanks to Will Mooney, the Chef and owner at The Brothers Moon, a nearby restaurant featuring local, organic cuisine, I was in heaven. In the near decade of eating lunch on the road during shooting days, this was without a doubt, the best day of eating yet. Will brought enough food to feed a crew twice our size. The only thing missing from this event was a place to take a nap after such a feast! If you’re ever in the area, Honey Brook and The Brothers Moon should be two places you just have to visit.