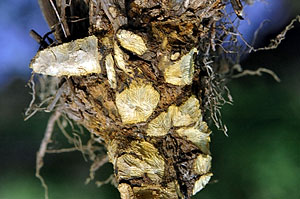 Think of ‘V’ for vole and vegetarian, moles are carnivorous

One day you notice your prized native azalea leaning in an unusual manner. Upon further inspection, it seems to be barely attached beneath the surface. You pull back the mulch to reveal a small quarter sized hole just at the base of the trunk. What in the world has happened? Your plant is a victim of the voracious vole.

If this sounds like a familiar scene, join the club. Voles are small rodents about four to six inches long with tiny eyes and ears and short feet and tails. They are found all over the country and have a variety of preferred habitats. However, all love to eat plant material including roots, bark and grasses. They can devour the root system of a shrub or plant to the point that it can be lifted from the ground, void of any roots as in the example of the Nandina plant in the picture above.

Unfortunately, a thick layer of mulch right up to the plant base provides the perfect cover for the ravenous vole. They work best under cover where they live, breed and dine. This cover also keeps them hidden from potential predators that help reduce their population. Moreover, voles are active year round, not only in the damage they inflict, but in the reproduction of their species.

Signs of vole presence include leaning, dead or dying plants, severed foliage, such as hosta leaves or well worn runways above ground. Signs of vole droppings may also be apparent.

Options for effectively controlling vole populations are limited. They typically reproduce at rates faster than people or predators can keep up with. However, because they are so active and move relatively slow, they are easy targets for many animal hunters. The first line of defense is to clear and remove their preferred habitat. Weeds, leaf debris and mulch are great covers for voles. Removing these from within three feet of plants will significantly cut down of vole activity in the area.

An effective but impractical method for protecting plants is to provide a physical barrier around plants, either encasing each root area in metal screening or hardware cloth with spacing of ¼ inch to a perimeter barrier around the root zone. Although this may be worth the efforts for certain prized plants, it is usually impractical in an existing landscape setting or on a larger scale.

Other control methods include habitat modification, trapping, repellents and toxicants. Habitat modification is the least environmentally impactful way to deal with population reductions for voles. By exposing voles to predators and eliminating their nesting sites, they are less likely to take up residence around your plants.

Trapping can be effective on a small scale. The standard mousetrap can be a lethal method by placing traps just outside the burrow holes and baiting with peanut butter or apple pieces. However trapping is a non-selective method of control and non-targeted animals may fall victim to this method.

Repellents can be effective for short periods but require reapplication in many cases if wet conditions are present. Capsaicin, which makes chilies hot, is a commonly used repellent. Other repellents include coated marble sized balls, which are placed into the entry of a burrow. They scent of the repellent is designed to drive the voles away from the area.

Toxicants should be considered a last line of defense. They can be effective but you need to check with the county extension service to see which are registered for use in your state, if any. Zinc phosphide is the most commonly used toxicant to control voles and is effective with one application. However, poison baits can be hazardous to other animals including ground-feeding birds. These methods should be used only as a last resort. To reduce exposure risk to other animals, glue the bait into a PVC tube several inches long and 1½ inches in diameter. Place this in the burrow.

Lastly, scare tactics or high frequency devises placed into the ground have not proven their effectiveness in controlling voles and are not recommended.