It’s not the most common question I get, but as winter approaches, people want to know if earthworms can survive through winter in places such as worm bins, garden beds or compost piles. 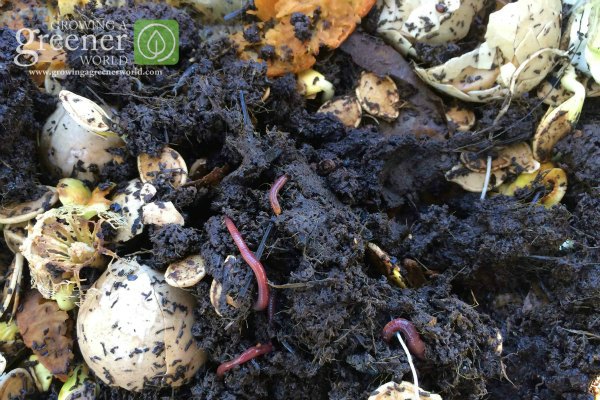 These are just a few of thousands of red wiggler worms residing in my worm bin and breaking down all the inputs into nutrient-rich vermicompost.

It’s an understandable concern. We gardeners work so hard to create an environment to attract worms and promote their reproduction all through the year. The last thing we want to do is see it all come to an end as the weather turns frosty.

Specifically, the question that prompted me to write this article came from an urban gardener that was raising earthworms in his indoor bin—specifically under the sink in his kitchen. His wife had discovered his obsession and relegated the worms to an outside existence. Yet with no real garden in which to go, he was worried that his growing collection of apartment raised wigglers would meet their maker if his bin was relocated to the frigid outdoors.

This is one of those bad news, good news answers. My reply to this newbie worm farmer’s inquiry went something like this; “No Wally, your worms won’t survive winter,” I wrote. I went on to explain that all was not lost though.

Although worms can’t survive freezing temperatures, they lay eggs that are encased and protected by very small cocoons. They can survive through winter to emerge as tiny baby worms, once temperatures warm up again. The worms Wally was worried about losing would be replaced by a contingency plan, cleverly crafted my none other than Mother Nature herself. Wally would have new worms once the weather warmed.

Worldwide, there are approximately 6,000 earthworm species, while only about 30 are found in the United States. And the most popular of all in the garden are commonly known as red wigglers.  Because they live primarily in just the upper layers of soil and amongst leaf debris, they’re a familiar sight in compost piles and gardens. Yet, because they never burrow far enough into the ground to avoid freezing temperatures, they don’t survive those conditions.

Fortunately, the eggs laid before their demise provide sufficient replacements next spring.

Other earthworms, such as the common night crawler can survive winter conditions by burrowing deep into the soil, below the frost line (the level below the soil surface in which groundwater freezes). That distance varies based on different parts of the county, ranging from zero to six feet in the coldest regions. Yet safely below the frost line, they live out the winter in small cavities or chambers.

Since night crawlers don’t truly hibernate, you may find them reemerging during a period of unseasonably warm weather and returning deep below ground once the weather turns cold again.

Escaping the cold is just part of what allows worms to survive through the winter. The other issue of course is in how they breathe.  Worms don’t have lungs. Instead, they breathe through their skin, as long as it stays moist. To keep their skin moist through winter, they release fluid and mucous that coats their body for whatever time needed.

Under ideal conditions, scientists estimate the average lifespan of earthworms that survive winters at four to eight years while the most common garden varieties live only one or two years. So whatever time our subterranean friends have on this earth (or in it), let us celebrate all they do to improve the conditions of our soil and take comfort in knowing they’ll be back to help us in the garden, just about the time we need them most.

P.S: If you want to see more of the worm bin where these red wigglers in the picture live, as well as the video of us making it and the step-by-step plans on how to make one yourself, I’ve linked to it all for you.