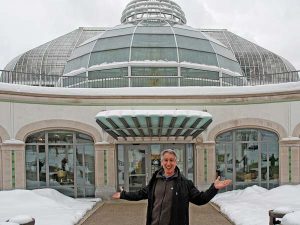 Joe in front of Phipps Conservatory

Today we visit Phipps Conservatory in Pittsburgh which has a special place in Joe’s heart because Garden Design Magazine asked him to write an article about the ‘Greenest Garden in America’. Patti gets a tour of the edible landscape and Nathan creates a special dish with one of Patti’s favorite finds in the garden.

Here is Joe’s orginial article for Garden Design which was later edited for length by the magazine:

How Ironic. A little over a hundred years ago, when the Phipps Arboretum was built by wealthy businessman, Henry Phipps as a gift to the city of Pittsburgh, the nation was enjoying an industrial revolution, and resources to construct and operate the building seemed unlimited. And yet, when Mr. Phipps set out to establish this project, he envisioned it to be a place “that will prove a source of instruction” for generations to come. Little did he know just how true that would be more than a century later.

In 1993, the city turned over control of the garden to a non-profit organization, charging it with maintaining financial stability and increasing the visitor experience as an established national attraction.

Now, heralded as “America’s Greenest Garden”, Phipps has become a model for other public gardens and conservatories around the world for sustainable building practices, energy conservation and eco-friendly methods. But it certainly didn’t start out that way.

As plans were underway to update and expand the buildings, bids were solicited from architectural firms. One of the firms responding included William McDonough, well know for his sustainable development practices. He proposed that Phipps leaders consider green building. His vision excited the board as a way to demonstrate environmental responsibility.

As they probed into ways to exemplify this in their expansion projects, they built the Welcome Center to be LEED Certified (Leadership in Energy and Environmental Design), the accepted standard of measurement for high performance, eco-sensitive green buildings established by the United States Green Building Council. 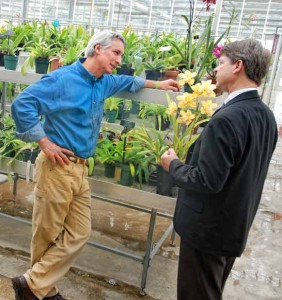 Richard explains the special characteristics of the growing greenhouse

Phipps Conservatory and Botanical Garden Executive Director, Richard Piacentini and team never set out to be this green when their expansion plans got serious in the mid nineties. However, as the building came to life, they quickly realized it was the right thing to do. “This should be a philosophy that drives everything we do to make sure it is as environmentally friendly and as sustainable as possible” said Piacentini.

He and his team, along with members of Pittsburgh firm IKM Architects, continuously asked questions during the design and construction process, constantly seeking a better way. By the time the current phase was finished, they had not only exceeded Silver LEED rating standards, they had created the greenest conservatory in the world.

Massive earth tubes are buried 15 feet underground, drawing 55˚F consistently cool air into the greenhouse as warm air rises and exits out of their innovatively designed open roof system. With no mechanical ventilation system, the greenhouse is 100% passively cooled. Remarkably, on any summer day, it is always cooler inside this immense building than any day outside; an amazing feat for a glass building, notorious for otherwise oven-like temperatures.

In winter, single pained glass on the greenhouse’s expansive south facing wall absorbs maximum sunlight while double-pained panels in the roof, root zone heating and extra thick side walls help absorb and retain heat in a most efficient manner. The net benefit is an energy savings of over $14,000 per year with these clever modifications. 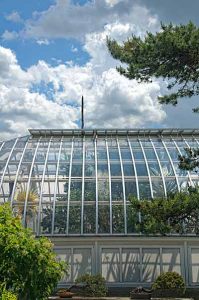 An energy cell has been installed to efficiently produce much of the power used in the arboretum while all of the Welcome Center’s electricity is generated entirely by wind power.

Mr. Piacentini is especially amused by the irony of the original conservatory of 1893. “With no regard to limited resources, to me, it was the epitome of everything that was wrong. Now, we’re taking this building and gardens, and saying, o.k., here’s the right way to use it”.

As past president of The American Public Gardens Association, Piacentini sees a lot of gardens. He notes; “Fifty million people visit our gardens each year. They look to us for inspiration and learning. We have a tremendous opportunity to help change gardening practices which are very wasteful of energy and produce a lot of pollution, especially the way people misuse fertilizers and pesticides. Who better to get the message across than public gardens?”

And plans are well underway as Phipps takes on an even bigger vision; that of being the worlds greenest building with their latest addition, slated for completion by the fall of 2009. With examples from public gardens like Phipps leading the way, green is one color that should provide much inspiration in the garden we all cultivate together.