Episode 107: The Importance of Bees in the Urban Landscape 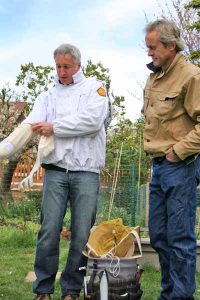 In today’s episode, Joe and Patti discuss the importance of honeybees and their relevance to the foods we eat. According to the Agricultural Research Service of the USDA, about one in three mouthfuls of food we eat is directly or indirectly related in some part to the honey bees’ job.

Also according to ARS/USDA : “The number of managed honey bee colonies has dropped from 5 million in the1940s to only 2.5 million today. At the same time, the call for hives to supply pollination service has continued to climb. This means honey bee colonies are trucked farther and more often than ever before.”

This drop in hives is partly due to a phenomenon called Colony Collapse Disorder or CCD. It is the unexplained disappearance of, most of, or an entire population of bees in a hive. Research is ongoing to establish the cause of this tragic loss of bees. For this reason home honeybee hive management is growing in importance and popularity.

Joe visits Corky Luster owner of Ballard Bee Company in Seattle, WA, which is an “Urban Pollinating Service”. Those that are interested can sponsor 2 to 4 hives in their garden in exchange for a large jar of honey or rent the hives outright. Corky maintains the hives on a weekly basis or will consult with beginners on getting their own hives started. Patti breaks down the mystery of just what is contained in a managed beehive. 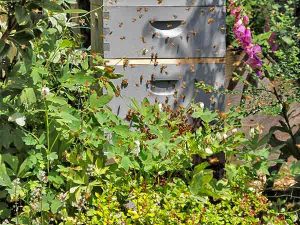 Next we visit two benefactors of Corky’s services. Robin Haglund a landscape designer and founder of Garden Mentors utilizes a hive in her Seattle garden that she has planned and planted especially to attract bees. Her company, fills the gap between homeowners who can afford full-scale landscape designers and those who cannot. After a rather sparse vegetable harvest last year Robin decided to have Corky install a hive to ensure better pollination this year. She discusses some of the nuances of hive placement and plants for the bees to enjoy.

In their building redesign forward-thinking Seattle restaurant Bastille, reinforced their roof in order to have a garden to provide the freshest ingredients for their menu. They turned to Colin McCrate founder of Seattle Urban Farm Company to design, install and maintain the current 4500 square foot kitchen garden. Plans are in place to enlarge the successful project. Joe and Colin talk about this ambitions venture and his design for providing year round produce. 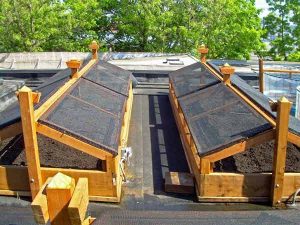 And Nathan visits with Chef Bobby of the Barking Frog at Willows Lodge as he creates a wonderful meal using Corky’s honey. Nathan provides us with his own recipe that includes fresh home-grown honey.

And just in case you were wondering:

What about cell phones—do they have anything to do with CCD?

“The short answer is no.

There was a very small study done in Germany that looked at whether a particular type of base station for cordless phones could affect honeybee homing systems. But, despite all the attention that this study has received, it has nothing to do with CCD. Stefan Kimmel, the researcher who conducted the study and wrote the paper, recently e-mailed The Associated Press to say that there is “no link between our tiny little study and the CCD-phenomenon … anything else said or written is a lie.

Honeybee information from the University of Florida

Article on Corky and his bees