Episode 112: The Power of Worms 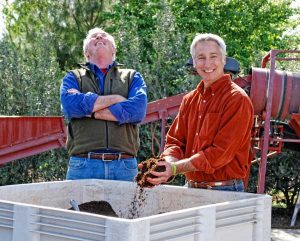 Today we meet Jack Chambers of Sonoma Valley Worm Farm fame. A pilot by trade and a gardener at heart, Jack’s life was changed forever by a bucket full of lowly creatures…worms. It was in 1992 that Jack first encountered the ‘Worm Farm’ after being directed there by a friend who suggested he purchase some worms for his compost bins. Depositing half of the 5 gallon bucket into an almost finished bin and the other half into a newer one, he flew out on a 5 day trip not thinking much about it.

Upon his return Jack was amazed and elated to find that the worms had fully transformed the one bin into rich, black compost during the short time he was gone. He was hooked! He went right back to the worm farm and purchased more worms.

He became friends with the owner, Earl, spending time there, helping him out and learning more about how to raise and maintain worms. At the time Earl was selling them as bait but as a gardener Jack knew that they had a more elegant future. Eventually Jack bought the farm and took it a giant step further into the production of worm castings and vermicompost tea. 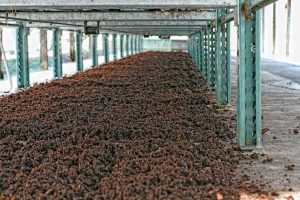 The worms are fed a steady diet of composted dairy manure. The fresh manure is allowed to compost long enough to kill weed seeds and pathogens but is designed to cool just enough so it will not be harmful to the worms. The resulting castings (worm poop) are rich in microbial activity, which adds life to the soil when incoorporated directly, strengthening the plants and providing added defense against disease.

Jack and his family have been fortunate to work with some high-end vineyards in Napa and Sonoma Valley. About a cup of worm castings is added to each hole as the vines are planted. According to Jack, “some vineyards were losing up to 20% of their new plantings. When they use our vermicompost, the losses are less than 1%. One vineyard used our vermicompost, and after planting 3,000 vines, they found that they didn’t lose a single vine.” Clearly a testament to the power of worms.

Worm castings are the base material for making compost tea and Patti shows us how. Used as a foliar spray the tea protects plants against diseases such as powdery mildew, rust and black spot. And when you have healthy leaves above ground you get healthy growth below ground as well. Nathan and Joe cook up some root veggies this week.

*Unfortunately, since this show aired, Windswept Worm Farm no longer has an online site. Google other options for ordering worm tea makers.

I’m sure you have been getting accolades all season long on your shows….

We loved OUR SHOW! You did a fabulous job! It was fantastic!

You look so natural, have such a great way of sharing the information. It was a joy to work with you; you made this novice feel so comfortable. Thank you for that.

Wish I could have tasted the potatoes you and Nathan cooked, along with that steak and the caramelized onions. Looked so good.

The photography was fantastic. Carl and Leonard were on it! The shots really captured the worm farm and the local feel of Sonoma. Wonderful.

Christa’s pictures were really great too. She captured the day so well.

You and Nathan are so good together on that opening scene – shot at the end of the day. You all were incredible.

It was so much fun having you all here. Having lunch, sitting around the table after the shoot and going down to the wine room was just great for us. Oh yes, and the shoot was a great experience. Thank you for letting me share the story with you, and now others.

Today, Nicole came by and we went to the ‘Growing’ site, and read the blog about the show. Amazing. It touched all of us so much. You even included the prayer! As I read it again it all seemed to be so right. Having you all here was such a special day for us. We didn’t want it to end! But, we hope it is just the beginning of a longer friendship with wonderful people. You are all welcome here any time. The next time we’ll have something grilled, Lois will work her magic in the kitchen and we’ll have some more Worm Farm Red – Syrah and Sangiovese. So please come back…

I’m enclosing some recent pictures. The Quail this year are everywhere. This guy is watching over the flock as they peck around the driveway. The second picture is the row we walked while talking about how we came to the worm farm. It is now in full bloom with the sunflowers, dahlias, potatoes, garlic, onions, peppers and tomatoes all coming on. The sunflowers are amazing this year. Here are some onions I pulled up today. Finally, a picture of the vineyard. I am watering for the first time this season. The late rains left so much moisture in the soil that the vines have been especially vigorous this year.

I think we are going to have a nice harvest. The weather has been a little cooler, which allows the grapes to ripen over time. I’m thinking that we will harvest the first group the first week or so in October, and then the next batch a week or so later. There is wine activity all month long. I’ll add you all to the wine group letter I send out to our family and wine groupies. You are all invited to what is a very fun pressing party. We press the wine, drink last year’s wine, tell stories, get wine stains on clothes, eat a great meal and sit at a long table and visit and eat some more. I think you would all fit in.

And Theresa you are a part of all this too. So join in the fun as well.
Thank you again for the great experience and opportunity to be a part of ‘Growing a Greener World’
You all have much to be proud of.
We all look forward to seeing you again soon, we hope.

Wormly with hugs all around.
Jack, Lois, Amy and Nicole