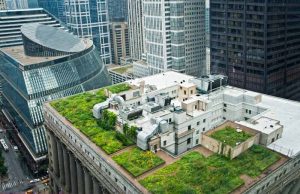 Plants act as insulation on the City Hall rooftop

Considering that urban sprawl is wiping out much of the available green space in our cities, we only have to look up for solutions. Rooftop gardens offer numerous opportunities to replenish much of what has been destroyed.

Today Joe and Patti visit Chicago’s famous City Hall rooftop garden. Although a welcome respite among concrete and steel, rooftop gardens offer so much more and it is one of the best ways to reduce our carbon footprint. 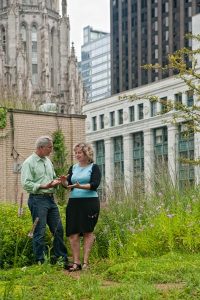 Atop the eleven-story structure and amidst the 20,000 square foot garden, Suzanne Malec-McKenna, Commissioner, Department of the Environment for the City of Chicago discusses Mayor Daly’s vision with Joe. Long concerned about the environment and inspired by a trip to Germany, Mayor Richard Daley championed an example he wanted emulated throughout the city. Although not an inexpensive undertaking the benefits are many.

Many factors must be taken into consideration such as weight load, waterproofing and drainage. It is not something that should be done without an expert. The City Hall garden is mostly an example of extensive design in which most of the landscape is only 3-6 inches deep. Only where the trees are planted is the soil mixture up to 18 inches deep.

Although designed with natives and non-natives, mostly prairie plants were used to create an inviting habitat for birds and insects. Even beehives are kept on the roof. Sedum is under-planted throughout the garden acting as a blanket to hold the root systems together.

Studies have shown that on an overcast day at 74° the temperature on the roof is 74° reducing the pressure on indoor heat and air demands. A black tar roof would be 156° and even a highly reflective white roof would be in the range of 105-110° comparatively. Air quality is increased, storm water runoff is managed more effectively and the heat island effect is greatly mitigated by green roof installations. 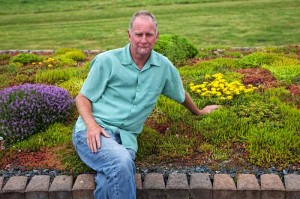 Drilling down the details necessary for green roof installation Joe consults with expert Ed Snodgrass author of several books on the subject. We meet up with them on the rooftop garden of the Ritz Carlton in Charlotte. Twelve years ago Ed began the first green roof nursery in North America and has seen increasing demand in urban areas.

Citing that a new generation of civil engineers is looking into the benefits of green roofs, he feels the primary drivers are storm water management, energy savings and moderating the heat island effect. As a living system, a green roof solves many of these problems simultaneously and does it mostly for free he says. 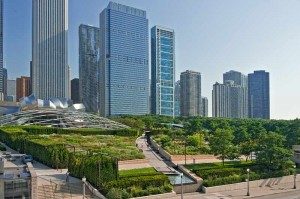 Back in Chicago Joe and Patti visit what is considered to be the largest rooftop garden in the world, Lurie Garden in Millennium Park. Built atop a parking deck and commuter rail at Millennium Station the 2.5 acre garden is the result of Mayor Daley’s influence and an international design competition. Jennifer Davit, Director and Head Horticulturalist, explains to Patti how the designers, Gustafson, Guthrie, Nichol of Washington state focused on texture in addition to color, provided for four seasons of interest including design principles from which everyone could learn. Piet Oudolf chose plants intended for the area’s climate and ease of maintenance.

Joe brings it all back home at the small but highly productive garden of restaurateurs Helen and Michael Cameron. The 640 square foot plantable area of the 2,000 square foot roof deck provides fresh, organic produce for their Chicago restaurant, Uncommon Ground. They can proudly boast it is the first Certified Rooftop Farm in the entire county. (at this time there is no certification for ‘garden’)

And, what is one of the easiest plants to grow in rooftop containers? A favorite of Joe’s; heirloom tomatoes. Chef Nathan prepares a delicious treat combining them with fresh mozzarella cheese and homemade croutons.

More on the City Hall garden