Episode 126 – Victory Gardens: Then and Now 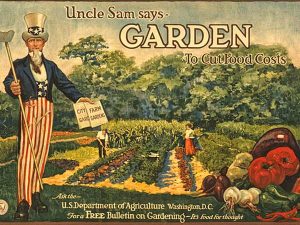 Although widely popularized in WWII Victory Gardens had their roots in WWI. Dr. Rose Hayden-Smith, a historian and nationally recognized expert on Victory Gardens and wartime food policies discusses the subtle differences.

Initially called “Liberty Gardens” in WWI they were promoted at home, schools and at work as a way to secure the national food supply. Americans were encouraged to grow more fruits and vegetables locally as a way to reduce food miles so that trains could move troops and materials instead. Additionally this freed up agricultural products that could be shipped to our allies in Europe. This call to patriotism served to unify a diverse population under one goal of assuring allied victory.

Just ten days after the bombing of Pearl Harbor the USDA convened a National War Garden Defense Conference to organize the WWII Victory Garden program, which became one of the most iconic wartime mobilization efforts in either war. This time Americans were encouraged to garden more for unity and service to the nation as a morale booster for troops and those at home. Although the food supply was secure, this effort was about improving American health and lifestyle and reconnecting Americans to the land. 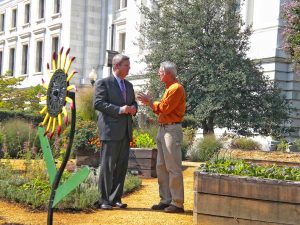 Agriculture Secretary Vilsack advocates gardening in the war against obesity

That sentiment has never been more important today as we battle obesity, try to encourage a healthy lifestyle, engage the community and strive to protect the environment. Visible initiatives such as the White House Victory Garden and the People’s Garden at the Department of Agriculture seek to inspire those millions that pass by each year.

Appointed as Secretary of Agriculture in 2009, Tom Vilsack wasted no time in implementing the People’s Garden as a commemoration of USDA founder Abraham Lincoln’s 200th birthday. The 6,000 square foot organic garden replaces asphalt and includes 1,900 square feet of raised beds. Joe and Secretary Vilsack discuss the mission of the garden.

“Population must increase rapidly — more rapidly than in former times — and ere long the most valuable of all arts, will be the art of deriving a comfortable subsistence from the smallest area of soil. No community whose every member possesses this art, can ever be the victim of oppression of any of its forms. Such community will be alike independent of crowned-kings, money-kings, and land-kings.” 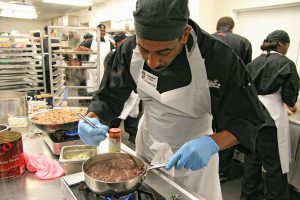 Leading by example, this initiative has grown globally to gardens in every state in the US, several territories, some foreign counties and embassies, many of which are in schools – 525 and counting. Encompassing food production, education and physical activity Secretary Vilsack hopes to inspire people to reconnect to their food supply and recognize the associated risks so farmers and ranchers are more appreciated for how difficult it is to raise food.

As a large donor to D.C. Central Kitchen, the People’s Garden had so far contributed 60,000 lbs. of fresh produce. Patti gets a first-hand look into the world of this inspirational non-profit by Chief Development Officer, Brian McNair. 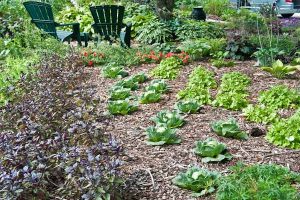 On an individual level many gardeners are embracing the concept of growing and sharing your own right at home. One such gardener in suburban Chicago is Shawna Coronado who mixes vegetables and ornamentals seamlessly in her front yard garden.

Saddened that a neighbor could not afford to feed her family and subsequently lost her home, Shawna decided to inspire others to make a difference and contribute produce to feed the hungry. Gardening organically with sustainability in mind, her small garden provides enough fresh produce not only to feed her family but to donate to local food pantries as well. Join Joe as he and Shawna discuss some of the special features incorporated into her garden.

One of Joe’s favorite edibles to bring a colorful pop to your garden and to your plate is Swiss chard. Chef Nathan takes heed and prepares a tasty frittata for breakfast.