After highlighting some of the most intriguing people of season one, that we share with you some of the most interesting places we visited during that  time. And just as it was difficult to feature only four people, the same challenges applied to the places we visited as well.  But here it goes. We hope you enjoy seeing and learning about these places as much as we did! 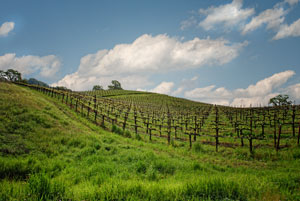 Fetzer is green both inside and out

In this episode we become acquainted with Fetzer, a vineyard so entrenched in stewardship of the planet it has been coined “The Earth-friendly Vineyard”. Founded in 1968 Fetzer has always been a pioneer in the field…literally!

In 1984 made the commitment to convert to utilizing only sustainable practices. Today, they’re a model as a sustainable grower for the entire industry and readily shares their methods and philosophy. From their fields to their warehouse and offices, everything is designed to take as much pressure off the environment as possible.

Watch the entire episode from season one here – Episode 109: Fetzer, The Earth-Friendly Winery

In this segment, we put you in touch with one of the greatest soil amendments nature has to offer: Compost. Joe gets the grand, behind the scenes tour of the largest composting facility of its kind in the world. Cedar Grove Composting has perfected the magical process of transforming matter that would simply clog landfills, straining the environment and turning it instead into gardeners’ best friend.

This segment features the most popular “behind the scenes” capture of season one. Even if you don’t care about compost, you might want to watch anyway!

Watch the entire episode from season one here – Episode 106: Compost 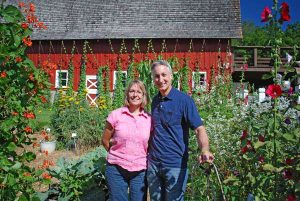 Joe and Patti travel to Decorah, Iowa – where the Heritage Farm houses one of the world’s 1,400 seed banks – and help celebrate their 35th anniversary. Founded in 1975 by Kent Whealy and Diane Ott Whealy, the idea behind Seed Savers Exchange lay in two varieties of plants handed down by Diane’s grandfather, whose parents brought the seeds with them from Bavaria. Today with over 13,000 members contributing almost 1 million seed varieties, Seed Savers Exchange seeks to accumulate, preserve and protect our rich, diverse horticultural heritage from extinction. 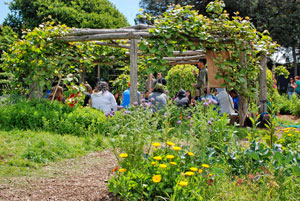 A classroom without walls? What a joy for students at Martin Luther King Jr, Middle School

In this segment, we visit the Edible Schoolyard in Berkeley, California. This nationally recognized organization was conceived in 1994 after a seemingly innocuous comment about the condition of the Martin Luther King, Jr. Middle School by restaurateur Alice Waters who passed by the school daily. Principal Neil Smith then contacted Alice and, knowing of her reputation, invited her to plan a garden at the school. The rest, as they say, is history.

A food pioneer of sorts, Alice believes that fresh food from sustainable sources should be available to everyone. In her words, it should be a “right, not a privilege”. That meeting in 1994 resulted in the creation of a world famous teaching garden and kitchen where students grow, harvest and cook produce from the garden, right there at their public school.

Watch the entire episode from season one here – Episode 108: The Edible Schoolyard 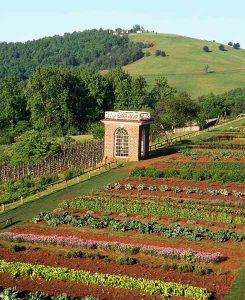 The 1,000-foot kitchen garden was carved out of the Virginia hillside

The term ‘organic gardening’ is now in use today more than ever. J. I. Rodale understood the relationship between the soil and healthy plants but Thomas Jefferson made the connection long before that. And, although everyone gardened ‘organically’ back then, he was a pioneer using his garden as a laboratory.

Joe and Patti visit Jefferson’s Charlottesville home, Monticello, to speak with the undisputed authority on Thomas Jefferson’s gardening practices, Peter Hatch. He is the Director of Gardens and Grounds for the Monticello estate. The 1,000-foot kitchen garden at Monticello, is legendary for the variety and scale of its vegetable production. Growing more than 330 vegetables and 170 varieties of fruit, many of the procedures and practices Jefferson observed and recorded are still in use today as sustainable organic gardening methods.

We hope you’ve enjoyed this look back as Season One as much as we have! Join us next time as we bring you the first all-new episode of Season Two.