Episode 326: Behind the Scenes 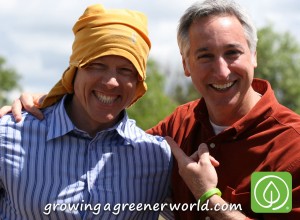 Nathan of Arabia? Chef Nathan and Joe on location in Sonoma Valley, CA

In our 26th and final episode of Season Three, we’ve chosen to share with you some of the information, stories, footage and photos of what happens behind the scenes of our television show.

Meet the team! For starters, if you watch our television show of course you already know Joe Lamp’l, host and Executive Producer, also known as “joe gardener”.

And you also know co-host and Chef Nathan Lyon, who makes all of the incredible dishes in the cooking segment of our show and travels with us sometimes as well. We just wish we could share the incredible tastes and smells through the magic of television! 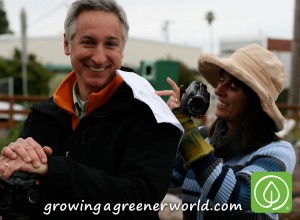 Theresa borrows Joe for use as a writing desk to make some last-minute script changes on location. An executive producer’s job is never done!

But in this episode you’ll also get to know our Co-Executive Producer Theresa Loe, and Consulting Producer Todd Brock.

It’s true, if you’re a big fan of the show you’ll remember Theresa Loe as the subject of Episode 115/204: City Homesteading and Preserving the Harvest, and co-host of Episode 210: Backyard Chickens.

Todd makes an appearance in the Backyard Chickens episode as well, building one of the chicken coops from his book, Building Chicken Coops For Dummies

. Get to know both Theresa and Todd better in this episode where they chat with Joe about what it takes to put together a show. 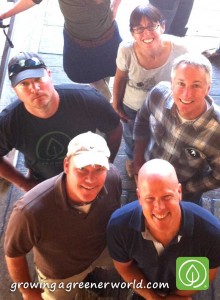 Clockwise from top: Theresa, Joe, Nathan, Carl and David take a quick break from filming for lunch in the Mission District of San Francisco.

One person who is almost never on camera is the man who is always behind the camera. In this episode you’ll finally meet our Director of Photography Carl Pennington and his brother, cameraman David Pennington. Learn a little about what everyone on the team does and what it’s like to travel the country and tell the stories of inspiring people.

More Behind the Scenes!

*Links related to books and merchandise are affiliate links