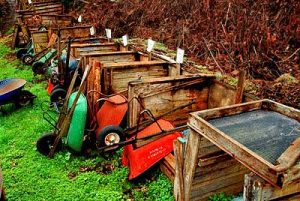 many anxious home vegetable gardeners, seeds are started indoors in February, nurtured and nudged along through March, and planted outdoors in early April, often weeks ahead of the last potential frost. Sometimes they get lucky, defying Jack Frost with ‘wall-o-waters’, cloches, cold frames, row covers, mulch and more.

The weather can be a funny thing. It can lull you into a false sense of security, and just when you think frost and freezing temperatures are gone until fall, it hits you like a runaway train from the North Pole. Your tender warm-season plants are blind-sided by the unexpected but not unlikely late season blast of arctic temperatures.

You pick up the pieces and start over. Thinking you’ve lost weeks of precious time, you curse yourself for even trying such a ridiculous scheme. The fact is, when soil is warmer, time lost to frost and cooler temperatures is quickly made up with more hospitable growing conditions.

By mid-summer, chances are your spring garden is finishing up, looking pretty tired from a productive season but replete with the battle scars of the requisite pest and disease problems. You call it a day and put away your tools until next season. Or do you?

Some die-hard vegetable gardeners long to defy Mother Nature on the other end of the growing season, this time, extending the gardening season until the first frost of fall. But how do you start a new garden in mid summer and expect equally successful results as those from your spring garden?

There are a number of techniques used to stretch the season. One of the simplest steps is to plant your crops in stages. This technique is known as succession planting. For example, if you love fresh-off-the-stalk corn, you might not want to plant your entire plot all at once since it will be ready for harvest, all at the same time. Instead, stagger the plantings a week at a time or so, so that corn is ripening all throughout the growing season.

Other times, you may want to start a mid-season, second planting of your favorite warm season vegetable crops. Here’s what you need to know if you plan on eating homegrown vegetables right up until that first frost of fall.

1. Know the dates of the average first frost of autumn. Your county extension service is a good source for this information.
2. Know the average growing time from seed to harvest. It’s listed on the seed packs or plant label.
3. Although many root crops and leafy greens don’t mind frosty temperatures, classic warm season vegetables won’t survive. Know which crops are sensitive to colder weather and time the planting accordingly.
4. For warm season crops maturing into fall, work backward from the first frost date. Determine the number of days to maturity and count back to see if you still have time to plant, considering all the days involved in the growing cycle.
5. Before sowing a second crop, use a spading fork to turn over the soil and remove any left over roots or buried debris.
6. Replenish the soil nutrients depleted from the first crop. Incorporate compost and a balanced, slow release fertilizer into the soil before planting.

Seeds or plants that are sown in mid to late summer may start out fast and finish more slowly. As day length shortens and temperatures start to cool, rapid growth subsides. Although you can expect great success with your second planting, don’t expect exactly the same results.

The shorter days of autumn include lower sunlight levels and reduced solar energy. Accordingly, fruit can be smaller and yields are less. On the other hand, temperatures are more pleasant, pests and diseases have subsided and the dog days of summer have passed. That’s a trade-off I can live with any day if it means extending my vegetable gardening season right up to a hard freeze.