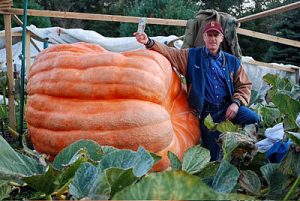 Just like gardeners, the act of gardening can take on many forms. As you and I fret over important backyard challenges – such as why our hydrangeas aren’t blooming or how come that tomato just won’t ripen fast enough – others are dealing with much bigger issues. Scattered across the country are a few thousand ‘extreme gardeners’ who methodically plod through the art and science of competition to grow the world’s largest pumpkin each year.

Steve Connolly of Sharon, Massachusetts is one such gardener. Soft-spoken mechanical engineer by day, Giant Pumpkin Growing Super Hero by night (and weekends); Steve’s been in the news a lot lately. With just a few weeks before the big weigh-off, word was getting around that this might be the all time mother of all pumpkins! Until now, the world record – set by Joe Jutras in 2007 – weighed in at an astounding 1,698 pounds. That shattered the previous record of 1,502 pounds, set just one year prior.

Although not an exact science, approximate weight can be calculated from measuring a pumpkin’s size. With more than a week to go, Steve’s pumpkin appeared to be nearly 1,900 pounds! The final and official weight would not be known for more than a week, but all eyes and ears were on what had been affectionately dubbed the “Beast from the East.”

During its peak growth phase, this pumpkin was gaining in excess of 40 pounds per day. A hearty diet of organic nutrients to beef up weight and mass during growth had caused it to become so big that it was at risk of breaking up or even exploding. That’s exactly what happened to the other four pumpkins Steve had been nurturing as possible contenders. Now down to his last candidate, efforts were made to drastically slow the growth. Roots were severed, water intake slashed, and I’m betting a few prayers lifted up – all in an effort to keep her intact for just a few more days.

This story garnered huge national media and a cult following which grew as fast as Steve’s pumpkin. NBC’s Today, NPR and a host of newspapers latched on the story and followed it closely.

On the glorious fall Saturday morning of October 11th, Steve and his small army successfully transported her to the Topsfield Fair weigh-off in Topsfield, MA for the moment of truth. A large audience witnessed the drama, as the pumpkin weigh-off came down to the final two contenders. Current world-record holder Joe Jutras’s entry and Steve Connolly’s Beast from the East went head-to-head.

With great fanfare, Joe’s pumpkin weighed in at impressive 1,507 pounds, the heaviest of the day…up to that point. As Steve’s entry was reverently hoisted onto the scales, a hushed murmur could be heard rapidly spreading through the crowd. They had detected what Steve saw for the very first time as the pumpkin was hoisted; a small leak coming from its bottom. His worst fear was coming true right before his eyes. Although it weighed in at 1,568 pounds (the largest pumpkin in the world for 2008), the rules are very clear. Due to this slight but costly imperfection, the “Beast” was out of contention!

There was no denying Steve’s disappointment, but he immediately started looking ahead. She was quickly transported back home where Steve harvested the 584 seeds (after all, he’s an engineer) from the belly of this otherwise flawless pumpkin.

For many competitors, growing record-setting vegetables is more business than gardening. Seeds from a consistently winning cultivar can fetch as much as $500 each. Steve, too, had already received numerous offers to purchase his seeds. For the last 12 years, new records have been set with every competition. Much of that is due to advances in the genetic breeding of champion seeds. That doesn’t account for the whole story.

Although many growers start with the same seed, there is only one winner. That’s where the gardener comes into play. Steve, the businessman and competitor, is already thinking to the season ahead and has seed for next year stored safely away. According to Steve; “It’s the gardener in him that still has another trick up his sleeve” and, just possibly, the key to the 2009 world record pumpkin.