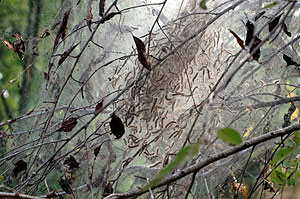 Depending on climate there can be up to 4 generations

By now, you are seeing masses of spidery webs engulfing the tips of tree branches in your yard and around town. Not sure what they are? They’re fall webworms. Many people confuse these with a similar sight in the spring, typically in the crotches of trees, which is the eastern tent caterpillar.

The fall webworm (Hyphantia cunea) is the larval form of the tiger moth. The tiger moth is about 2 inches across from wingtip to wingtip. Its color can range from pure white to heavily speckled with brown. It is native to North America and Mexico and is distributed throughout the United States and Canada. Over wintering in leaf debris and mulch, the adult moth appears in May to July. She lays about 200-500 eggs in a greenish mass underneath the leaves of deciduous trees in late spring through fall. A wooly or scaly coating protects the eggs. Depending on the climate there may be from one to four generations. The eggs hatch in a few days and the larvae begin spinning webs around the leaves as they eat. They do not leave the protection of the web while they are eating and growing. Once they have had their fill, by mid-summer, they form cocoons in the bark of trees and in ground debris. This first generation is small and generally goes unnoticed. 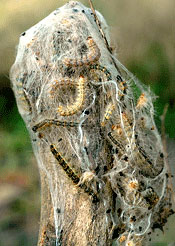 The second generation that follows is more obvious, larger and more destructive. In much of the U.S., there are two generations. The caterpillars are yellowish to greenish, covered with long silky grey hairs, with a dusky stripe down the back and a yellow stripe on either side. They may have either a black or red head. Full-grown larvae can eventually reach an inch in length.

They only pose a minor threat as a forest pest, but shade trees and ornamentals can be heavily defoliated. Fall webworms feed on about 100 different species of deciduous trees but rarely on conifers. In the Eastern United States, trees that are targeted include: pecan, walnut, American elm, hickory, fruit trees and some maples. In some areas, persimmon and sweet gum are also affected. In the western areas of the country, adler, willow, cottonwood and fruit trees are favorites.

In most cases, the defoliation that occurs will not materially damage the trees because they will loose their leaves anyway. Only in severe cases is the infestation so bad the tree cannot recover. But, in the case of pecan and fruit trees, the leaves are more critical for fruit production and the ripening fruit can become bound up in the webs substantially reducing the yield.

Homeowners have some control over populations of fall webworms. A thorough late fall or early spring clean up of leaf litter and mulch will help eliminate many of the cocoons. Then determine your tolerance for the eventual occurrence of webs. Opening up the webs you can reach makes the larvae available to birds so you can let nature take its course. 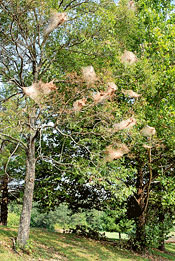 Cleaning up leaf litter will destroy many cocoons

A spray or dusting of Bt (Bacillus thuringiensis) while not harmful to wildlife, bees and humans will kill non-harmful caterpillars and butterflies and should be used with caution. The web must be open in order to deliver the spray. Affected branch ends can be pruned and burned or thrown in the trash. Do not burn the nests while on the trees as this can cause more damage than the pests themselves. Diazinon can be applied but be sure to avoid drift and run off into surface waters. Carbaryl (sold as Sevin) is also effective. We encourage you to use the most effective but least toxic method of control.

Our native fall webworm has caused great concern in China where it has no natural enemies. Even some bird species will not touch the worms. They were first found in China in 1979 having hitch hiked into their ports on ships. Recent research has uncovered a type of alkali bee, which is parasitic and kills the larvae. Sometimes we are so focused on the invasiveness of foreign species here we fail to take note that our natives can be as dangerous on other continents.