Not long ago, we filmed an episode for Growing a Greener World, which was all about composting. To this day, we get many requests for the instructions on how to build the three-bin composting system made from used shipping pallets that I constructed during the episode. 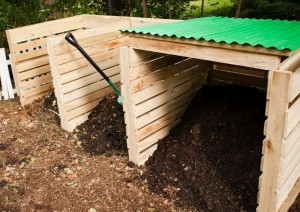 The beauty in the design was its simplicity, low cost, and the ability to repurpose some of those ubiquitous pallets that pile up everywhere. With a drill and a few all-weather screws, anyone can assemble a multiple-bin pallet composting system quickly and cheaply. In my case, with the help of a neighbor simply tohold the pallets in place as I drilled the screws, we had a basic three-bin composting system securely in place in a matter of minutes, literally.

The bin was so functional yet simple, I started thinking of ways to enhance it. By the next day, I added a hinged roof to the section of the bin that would store the finished compost, and more hinges to that outer pallet wall of the finished compost section to allow for easier access.

Pallet Selection. Pallets are made from all different types of wood. For a compost bin, it’s preferable to find those that are rot resistant, such as oak or cedar. Pine although easy to find, does not stand up to the elements as long.  For strength and durability, you can’t beat hardwood.

Also be aware that pallets from one manufacturer to another are not always uniform in size. For this system, it’s preferable that they’re all the same size. It makes for a better looking finished product and helps during assembly to have one uniform size.

Most importantly, choose pallets that have not been chemically treated. The most common treatment methods for pests and pathogens are either heat-treating (marked on the pallet with “HT”) or fumigation, using Methyl Bromide (marked MB). Stick with heat-treated or new virgin wood if you can find it.

Assembly. Start with a level surface for the area where your system will set and assemble it in place. For my setup, you will need seven pallets: one for each outer wall, two for the dividers to separate the bins, and three across the back. Assembly is straightforward and intuitive. I simply started by attaching the left outer wall pallet to the back pallet with several screws. Then I added one of the inner pallet dividers and secured it against the back pallet. With the remaining pallets, work your way across for the next two sections in this same manner. In no time, you are finished with the basic setup and ready to compost.

The Options. The assembly was so fast and easy, I felt like I wanted to spiff mine up some more. Although totally unnecessary, I liked the idea of having a cover over the bin that would hold my finished compost. My improvised solution consisted of a cut-to-fit sheet of corrugated plastic screwed to a wooden frame made of 2×2 pine. I then attached two hinges to the fame and secured them to the outside of the back pallet.

Two larger hinges were also used to attach the outside pallet wall of the finished compost section to the back pallet. My thinking was it would be a nice way to swing open that side so I had better access for retrieving compost. In hindsight, it’s a nice feature but it’s not necessary and more trouble than it’s worth. I’m building a new pallet composting bin this weekend at the Garden Farm where I now live. It will be a no-frills, basic model which is frankly the best overall and easiest by far to make.

Two final thoughts: Consider grabbing an extra pallet to use just for additional parts. I removed the slats from it to place in between other slats of my finished bins wherever I wanted to close some of the gaps. It’s a smart and simple fix to help keep more of your precious compost in place.

I also strongly suggest adding a long treated 2×4 across the backside of the pallet wall. The extra stability it provides is a simple and inexpensive option to reinforce the entire system.

You can watch the composting episode and see just how I built this bin here.