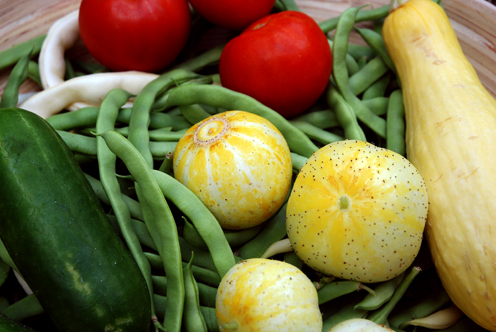 Here’s a quick update on the garden. I’m very excited to report that as of today, my cumulative harvest exceeds 50 pounds! That’s on a total investment of $15.05. So assuming I don’t spend any more money, which I don’t plan on doing, my current cost per pound is about thirty cents. Assuming I reach or exceed my goal for the summer of 100 pounds of harvested veggies, I’ll be looking at a cost per pound of fifteen cents! Now that’s my kind of price! Not to mention the unbeatable taste of organic food, fresh from the garden.

On the downside, my cukes are starting to show signs of decline. The cucumber beetles have done their damage, causing bacterial wilt on some of my plants. At this point, I don’t plant on trying to save them because once the plant is infected, there is little else to do. But on the upside, I have lots of tomatoes forming on six of my eight plants. The other two are a new variety and the flowers develop but then nothing comes of them. Oh well, that’s part of why I love gardening so much. Nothing is predictable!

I know I’m due for another video so I promise to have that out by the end of the weekend. Frankly, there hasn’t been much new going on so I haven’t felt the compulsion to crank out a video that isn’t telling you anything you haven’t already heard. But I am going to update you on how the garden looks now and let you know about my fertilization and show you how I’m securing my massive tomato plants.

That’s all for now. Thanks for checking in!
JL