Now that I have time to catch my breath, I thought I’d share with you another part of my life when I’m not producing or hosting Growing a Greener World. You may know, I’m the spokesperson for Fiskars Garden and Outdoor Living. In the time I’ve worked with them I’ve come to learn a lot about the company. They do a lot of great things and make some incredible gardening tools. But it’s my involvement with Fiskars Project Orange Thumb that stands out the most. Since 2002, Fiskars has provided over one million dollars to 115 community groups and in the last three years, helped to complete nine extreme garden makeovers in the U.S. and Canada.

Through community gardens people are saving money, eating healthier, and creating a strong community bond through gardening. There are approximately 20,000 community gardens nationwide, according to the National Community Gardening Association. In 1996, there were only a little over 6,000 gardens! In these tough economic times don’t think your community can’t afford to build a new garden—consider applying for a Fiskars grant. Grants include the donation of Fiskars tools, gardening materials, seedlings and start-up plants. And your group might even be the winners of the garden makeover award. 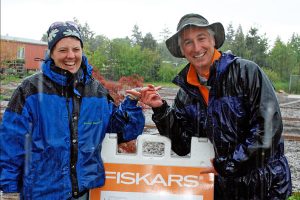 Co-designer, Robin Haglund and I celebrating at the end of the day...in a hailstorm

Earlier this year, I joined company and community volunteers in Portland, Oregon to help build the first of three Project Orange Thumb community gardens. We started with a blank slate under sunny skies and eight hours later, with the help of an army of workers, ended with a finished garden of 20 large raised beds, albeit in a full-blown hailstorm.

In early June in the Linden neighborhood of Columbus, Ohio, over 70 volunteers armed with wheelbarrows and shovels descended upon this site for a one-day transformation an abandoned lot into a beautiful landscaped area. Trees, plants and lots of color replaced rotting tires and trash. “It’s time to start looking at the beauty of what we have in the Linden area as opposed to the negative things…” said one volunteer. The garden will also serve as an environmental learning laboratory for nearby schools.

A month later, a similar number of volunteers helped transform a patch of barren land across the border, in Vancouver, British Columbia into a productive neighborhood garden…as always, in less than eight hours. It’s a challenge to get everything completed in such a short time but somehow the adrenaline and everyone helping towards a common goal gets the job done. The garden includes raised beds for growing fruits and vegetables, a perennial garden and flowering trees. The people of Vancouver are hardworking and extremely ambitious. Their goal is to become the world’s greenest city by 2020.

In 2011, we’ll be back at it again. If you think a Project Orange Thumb grant is for you, don’t wait any longer. You must submit your application by December 31st and your organization must be non-profit. Winners will be notified in early February. Wouldn’t it be great to take a small slice of your neighborhood and create something healthful and beautiful for everyone’s benefit? Take a chance! What have you got to lose?