Rose's enthusiasm about the history of Victory Gardens is contagious

If I were alive during the original Victory Garden campaigns of WWI and WWII, it wouldn’t have taken any convincing for me to get out there and start a food plot of my own. Considering there’s a strong chance I wouldn’t be producing a television show back then, I’m pretty sure I’d have the time I needed to take care of a garden.

But as much as I’ve heard about the subject all my life, it wasn’t until doing the research for this show that I realized just how important they were to our war efforts, food security and for promoting gardening skills to children and families. Credit Pamela Price for some great Victory Garden wisdom and for the introduction to Rose Hayden-Smith, our guest historian during the first part of our show. Rose was my guest expert for a podcast I did on the subject. She was fascinating then and I knew this wasn’t the last time I’d be working with my new friend.

Rose is a walking encyclopedia about a lot of historical things but you should see her get excited about Victory Gardens. You can if you watch the episode. Rose was the very last segment we shot for season one. We flew her into Atlanta and taped our interview at The Atlanta Botanical Garden. Less than 24-hours later, she was on a plane back home; far too little time together for such a wonderful person as Rose. 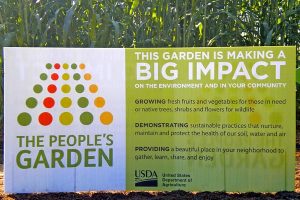 The modern day version of Washington D.C.’s role in Victory Gardens is The People’s Garden. We had the good fortune to interview Secretary of Agriculture, Tom Vilsack for this segment. The People’s Garden initiative was enacted shortly after Secretary Vilsack took office. Now, there are gardens all over the world on USDA property. I was impressed to know that the USDA has identified food gardening to be of such a high priority for so many reasons, that they are now putting so many resources behind it.

Unlike most of our taped segments where time is rather variable as we work out the filming strategy with our guest, this day would not offer such luxuries. We had exactly 45 minutes (negotiated up from 30) to shoot the sit-down interview, our walk and talk, and get b-roll of the Secretary in his office. We were ready…and so were they. About 30 minutes before our scheduled time with him, the Secret Service agents started canvassing the perimeter. They’re easy to spot. Full suits, dark shades, nice haircuts, and the little coiled wire running up from their suit and behind one ear. At the appointed time, Secretary Vilsack along with his entourage swooped into the garden. After a few brief introductions, we were taping. 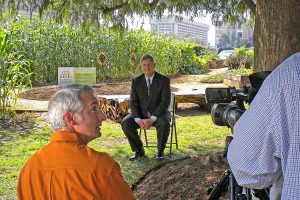 As fascinating as Secretary Vilsack is, my highlight was a VIP trip into his private office

Although I wasn’t surprised, it was amazing to see how eloquently he handled each question. While I’m very aware he’s fielded such questions hundreds of times before, I was still impressed that he gave such clear and thorough responses. But even more amazing was how he managed to stay so cool in that suit, despite the sweltering heat of the late morning in August. Not a bead of sweat dampened his brow.

The highlight of the day though was the opportunity to accompany the Secretary to his office for some final shots of b-roll with him looking all official at his desk and such. This time we were part of his entourage and it was a rush. As we walked briskly from the garden and into the USDA headquarters, we swooped right past the security guards and all their screening equipment without even breaking stride, right into a private elevator that was waiting for our arrival. The moment seemed surreal. Here I was, riding in the elevator with my two camera guys, two secret service agents and the Secretary. So cool, and so was his office. It was massive. The ceilings must have been 20 feet high at least. As the guys shot their video, I had about five minutes just to stand there and take it all in. Secretary Vilsack went about his business, signing documents and talking with his aid. The massive paintings on the wall and all the assorted memorabilia had me wondering about the stories behind each and every one.

At exactly the final minute of our appointed time, his aid casually looked up and said; “You guys have about all you need?” Taking his cue, our time was up. Even if we didn’t get what we needed, it was time to go. I haven’t been to Washington since I was a child but what a way to come back!

Be sure to listen to my podcast interview with Rose Hayden-Smith as well.