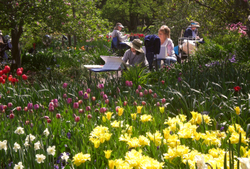 As the host of GardenSmart, I have the privilege of traveling to some of the most beautiful gardens in the country. This past week, my crew and I spent the week in St. Louis, Missouri. Two of those days were spent in the spectacular Missouri Botanical Gardens. It was a trip I had really been looking forward to. I’d written about the many great things the garden was doing, without ever having the chance to see it first hand, until now.

As we arrived for a day of taping on a brisk, bright morning; the unassuming entrance to the gardens surprised me. It wasn’t the grand, elaborate entrance I was expecting to see for one of the finest botanical gardens in the world. Once we passed through the main lobby and emerged into the actual gardens, it was breathtaking! The dramatic contrast from the front into the gardens was enhanced because of the stark contrast between the entrance and the amazing gardens within.

Due to our intense shooting schedule, we usually arrive at sunrise to every garden we feature. That’s just fine with me. There are no crowds, no distractions and nothing but amazing light to showcase the freshness of the new day in a beautiful environment. It’s my favorite time in any garden. Imagine being in a horticultural showplace that plays host to nearly a million people each year, and we have it all to ourselves – if even for a few hours. The only sounds in the garden at this time of the day are the chirps and songs of many birds and the snips of pruners, as the talented horticultural staff puts the finishing touches on the many plants and flowers to greet so many people this day. 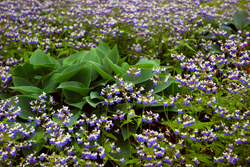 Once the gates open at 9am, the garden is buzzing with activity. Children arrive by the busloads. Artists set up easels and canvas, as they stake their claim to picture perfect vistas for a day of painting. Photographers race through the grounds with expensive cameras and sturdy tripods. Ironically, one of them was my friend and internationally-acclaimed garden and nature photographer, Ian Adams. He was there on behalf of the Missouri Botanical Garden to photograph it for a soon-to-be-released coffee table book. Ian sees some of the most beautiful vistas in the world, and yet, he was simply giddy over the spectacular condition of this garden. 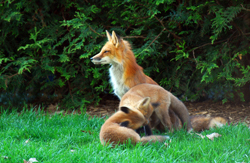 We spent two perfectly amazing spring days here. With so much to see and talk about, trying to decide what not to feature was the biggest challenge. Although the hours are long when taping a complete show in a single day, the rewards are worth it.

The day begins for us long before the rest of the world comes to visit, and it ends the same way. Hours after the last visitors leave, we’re still there – in the quiet hours of the setting sun. It’s my other favorite time to be in a garden. The garden comes alive again, and I am there with camera in hand, ready to capture those special moments and memories that I will carry for a lifetime.