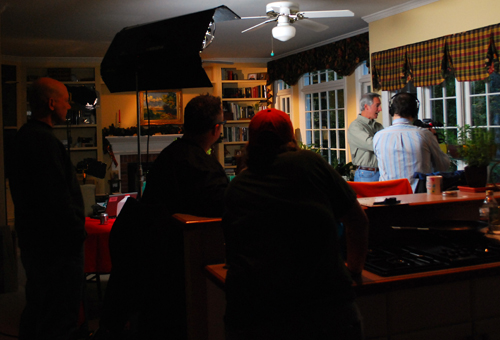 For the last three days, I was in Atlanta, Georgia taping short video segments on gardening for the Fiskars website. They will be posted bimonthly, starting in early 2009. Our goal was to work through a list of 24 topics, but thanks to some really crazy weather over those days, taping outdoors was far more challenging than anyone had ever anticipated.

Ironically, the Fiskars crew assumed that Atlanta’s weather would be milder for shooting outdoors in late October than in their home base of Madison, Wisconsin. They were partially right, because Madison was already receiving snow. However, Atlanta’s temperatures were in the 30’s with a wind advisory in effect for both days of taping. So, Mother Nature was not shining too brightly on us there either.

Fortunately and thanks to an experienced and well-equipped crew, we still managed to knock out a bunch of the segments, and we’ll get to the rest in a couple of months. That’s when we reconvene in Florida for another Project Orange Thumb Community Garden installation, scheduled for December 11th.

See you back here tomorrow, and I’ll fill you in on the all new joegardener.com and podcast which are both live now.