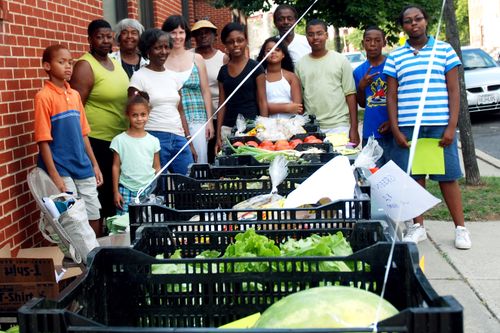 Last week I was in Baltimore to install another Community Garden for Fiskars, under their Project Orange Thumb initiative. Believing that community gardens can provide the catalyst and inspiration for great change, it’s common for the company to select sites for these major gardens in neighborhoods where poverty rates are high and urban blight is all too apparent. The neighborhood chosen for this particular installation was just such a place. Known as the Oliver community, it is located in the east-central part of the city.

Now, several organizations are attempting to revitalize the area. Installing a major community garden in such a place will hopefully be a serious shot in the arm. But this post in not about that community garden project. It’s about another grass-roots effort taking place on that same block, as well as in other neighborhoods across the city.  I wouldn’t have known anything about it, except for the four or five fresh vegetable-laden tables and handmade signs lined up on a nearby street corner that quickly caught my eye and drew me in. 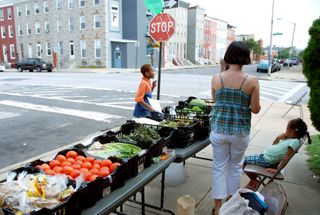 It was a bit of a strange site. So many fresh vegetables, obviously picked only hours earlier, stacked tall and wide, just waiting for people to buy them at bargain basement prices. But where were all the people? Recreate this scene in a heavily trafficked part of any city, or place them for sale at a farmers market on Saturday morning, and they wouldn’t last the hour. But that was the beauty of this program as I soon learned.

As it turns out, he project is a joint partnership between Knox Presbyterian Church and the Johns Hopkins Center for a Livable Future (CLF) (specifically, the Baltimore Food and Faith Project. I introduced myself and met several of the volunteers, including Angela Smith, Project Coordinator for CLF. She fills in the rest of the details for this amazing program.

“CFL recently undertook a food assessment of Baltimore and found there were certain areas where people didn't have much access to healthy, fresh foods. Often, these neighborhoods were located where poverty rates were high and which had suffered from urban blight for decades. Because the poor are at greater risk for developing diet-related diseases such as heart disease, stroke, diabetes, obesity, etc., and are the very people who have the most trouble finding and affording good food, we were particularly interested in finding a way to bring healthy food to them.

Knox Presbyterian is located in East Baltimore, an area that suffers from poverty and blight.  The majority of its food outlets are corner stores, which typically don't sell fresh produce. Knox has hosted a weekly soup kitchen, serving around 120 people each week for years now, and the church was interested in further reaching out to the community. They saw the opportunity to bring fresh, organic fruits and vegetables to neighbors as a natural extension of the work they were already doing. 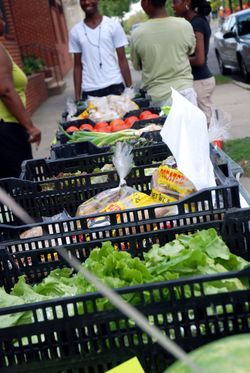 Joan and Drew Norman operate Maryland's largest organic farm, One Straw Farm , and they operate a Community Supported Agriculture (CSA) program. In a CSA, an individual pays to become a shareholder at the beginning of the season and receives several items of fresh produce each week until the end of the season. It's great for the farmer because it diminishes their financial risk; and it's great for the consumer because they develop a relationship with their farmer and know exactly where and how their food was grown. (Many people do this because they want to support locally-grown and sustainably-produced foods as well).

Since many people can't afford the large upfront cost of becoming a shareholder (sometimes hundreds of dollars), especially in East Baltimore, we purchased 10 CSA shares with money donated from a private foundation. For every 10 shares a congregation purchases, One Straw Farm throws one in for free, so, Knox receives the equivalent of 11 shares (plus a few donated by CLF), and we price the food as individual items based on what individuals would pay in a nearby grocery store for non-organic produce. All proceeds are put into a fund that will be used to purchase shares in upcoming years, the hope being that within three to four years, it will be economically self-sufficient and no longer need grant money to help maintain.

Unpurchased produce is either donated to Knox's soup kitchen or to local residents in need. Since many individuals are not used to eating seasonally, or cooking certain types of fruits and veggies, we give samples and recipes to take home and try out.

We've been doing the co-op every Tuesday since the beginning of July and it's really starting to pick up now. Members of the congregation, their kids and grandkids, and folks from CLF come every week to help man the table” (Angela Smith).

I applaud you and every person and organization mentioned here for your genuine desire to make fresh, healthy produce available to all in such a creative and sustainable way. Good things really to come out of a garden, especially when you add the efforts of so many good people!
JL