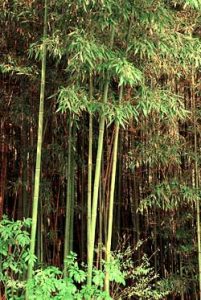 I am in awe of bamboo. It is likely the most versatile and resourceful plant on earth. It’s reported that the list of things bamboo is not used for is shorter than the list of things it is used for! As virtuous as this plant is, in a home landscape setting, its reputation can be less than righteous.

Imagine asking your neighbor for their permission to plant something in your own yard? Sounds absurd, doesn’t it? But, if you’re talking bamboo, planting the wrong type could unwittingly be the start of the next Hatfield vs. McCoy feud for as long as they live there!

You might not feel the need to keep your ‘green screen’ in-bounds but with most bamboos, you’ve now imposed a maintenance situation on you neighbor they hadn’t planned for. You see, bamboo has many, many qualities including the rate at which it grows. Although it’s actually a grass, bamboo is the fasting growing plant on earth, bar none! Some species can grow as much as four feet in a mere 24 hours (which leads me to think my lawn is a variety of bamboo sometimes!)

The stalks or ‘culms’ are fully grown in just a few months. With about 1,000 species growing around the world, the smallest reach a mature height of only about an inch while others top out at around 120 feet!

Now fast growth is one thing when you want to fill in a space or provide some privacy, but when it rapidly encroaches onto your neighbor’s property, that’s another story. And this is where the potential problem comes into play. Many of the most common species of bamboo are aggressive horizontal spreaders as well.

Bamboo is referred to as one of two types: running or clumping. Knowing the difference can signal the success or failure of your relationship when it comes to planting it!

Running bamboo (momopodial or leptomorph) should be taken at face value! They run. I’m not sure even I can out run them! They are difficult but not impossible to contain, even though their underground ‘runners’ (technically rhizomes) race below the surface anywhere from 2” to 18” deep. Containment methods include cement, metal and high-density polyethylene plastic rhizome barriers. However, once they have breached the barrier they are a challenge to reel in.

Non-invasive, clumping bamboo (sympodial or pachymorph) have short roots, 18” or less, generally forming discreet clumps requiring only a 3’ to 10’ circle of space to expand even at maturity; although their dense root structure can impose significant pressure on foundations, walls, fences and the like. They make attractive specimens and will form very dense screens albeit more slowly than their eager cousins.

Clumping bamboos tend to be less cold hardy than the running kind but no matter where you live, there’s a species for you. It’s found naturally on every continent in the world except Antarctica.

If you’d like to grow bamboo yourself, culturally it prefers rich, moist, well drained, neutral to slightly acidic soils. It is also partial to deep watering in soils with good drainage but can succumb to root problems in water-logged conditions.

In cold weather climates plant bamboo after the danger of frost has passed. In very hot climates plant in late fall or early spring and in mild climates such as that of the west coast bamboos can be planted any time of year.

Bamboo doesn’t have to be feared if you know what you’re planting before you start. If containment is an issue, take the appropriate precautions and proceed accordingly. Asking your neighbor for their permission? Well, that’s up to you.