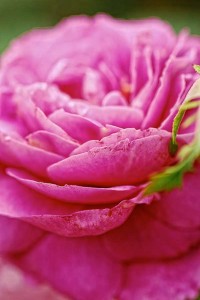 Over the last several weeks, as I’ve toured several gardens around the country, I’m reminded that in spite of the beauty of roses in a garden, they are one of the most feared plants to grow. Some gardeners try and succeed at growing pristine specimens, others attempt and give up, and some never try, waving the white flag before even getting started.

It’s true; other than their beauty, roses are notorious for two things. First, they are most famous for their susceptibility to certain diseases, namely black spot.

Secondly, roses are one of the favorite cuisines of Japanese beetles and other chewing, sucking pests. The beauty of a rose bush can be decimated overnight by a hungry group of beetles.

In spite of the potential ravages that can be imposed on these plants, with diligence and proactive measures, pests and diseases can be kept in check. However, it’s this required extra attention, combined with the perceived need to wage chemical warfare that seems to turn away more gardeners every year.

Over the last several years, great strides have been made in disease resistance when it comes to shrub roses. Plant breeder William Radler found it overwhelming to keep up with the rituals required to keep his many roses looking healthy. So he began the mission of literally breeding the diseases right out of roses.

In 1988 his mission became a reality when the award winning Knock Out™ Rose was created. Since its introduction The Knock Out Rose continues to reinforce its reputation as truly carefree. As a prolific bloomer and disease resistant plant, it has easily become the best selling new rose on the market.

Clearly there is an arsenal of products available to dust and spray roses for every pest and disease known to man, but at what cost? I am a strong advocate for exercising an increased level of tolerance before ever reaching for a chemical control. Even then, I’ll go for the most benign options first.

Over my years behind the scenes at countless public and private gardens, I’ve made note of the most effective, benign methods I’ve experienced personally and through interviews with other experts when growing roses to fight pest and diseases. The following list includes some of my findings and offers some of the more eco-friendly solutions.

This is relatively new proprietary technology discovered at Cornell University. It was called a “Major Scientific Breakthrough” by the USDA and awarded the Presidential Green Chemistry award by the EPA.

In nature, harpin proteins are produced by bacteria that cause plant diseases. Although harpin products have no direct effect on pathogens or pests, studies show that when plants detect harpin, they activate their own natural growth and defense system to protect themselves. In addition, harpin activates the plant’s photosynthetic activity making for an overall healthier plant.

Although not new, neem continues to be a front runner as an effective pest and disease control method, especially with roses. Neem is derived from the Neem tree native to India.

For controlling diseases on roses such as black spot and powdery mildew, neem has many fans and is a proven preventative and control. As an insecticide, neem is an effective control at fighting one of rose’s most notorious pests, the Japanese beetle. Neem can act as a repellent, it can disrupt the feeding cycle of certain other pests and it can suffocate others.

Neem is available as a concentrate that you mix with water and spray on your plants. It is also available as a ready-to-use spray. However, some neem RTU sprays include other active ingredients (organic or synthetic) to increase the killing power.

For me, sticking with the pure neem oil concentrate is the most benign and eco-friendly route. It breaks down quickly in the environment and is non-toxic to mammals.

Potassium bicarbonate has been proven effective in over 200 university studies and more than nine years of organic agricultural use at preventing and curing many plant diseases including black spot on roses.

Unlike many other commercial fungicide products, potassium bicarbonate is safe to use and is even approved for use by the Organic Materials Review Institute (OMRI). The formula used at the consumer level is the same used for commercial agriculture. It is currently available to the consumer as GreenCure® (www.greencure.net).

With eco-friendly options for growing and keeping roses healthier and with less time required then ever before, maybe it’s time for you to think about taking another look at adding them to your garden soon.