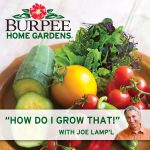 In the 1500’s artichokes were considered to be an aphrodisiac, and only men were allowed to partake. Perhaps that’s why Thomas Jefferson was such a fan in his Monticello garden. In my garden, they’re planted as much for their incredible ornamental value, with their structural form, silver green foliage and blazing neon purple color when allowed to bloom. But their delicious edible qualities are what you really want.