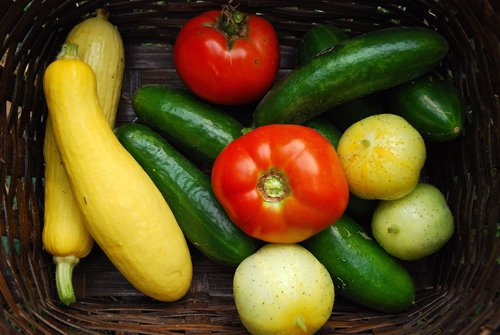 There’s something about that first tomato harvest that just seems to make the summer garden official. Not that the 25 pounds of fresh veggies picked so far don’t already speak to a productive garden. It’s just that we all live for that first red, ripe tomato. Today is that day for The Twenty-five Dollar Victory Garden.

If you recall, I had such a slow start to the garden in May, with all the heavy rain, I invested a little over five dollars on two established tomato seedlings to put in my garden. The rational was that I better do something to make up for lost time or I wouldn’t have any tomatoes before summer was over. So I bought on “Early Girl” and one Burpee Big Boy” plant. They towered over my homegrown seedlings and humbled me and every other neighboring plant that had been struggling just to survive through weeks of wet, sunless days.

Fast forward eight weeks and those two purchased plants are indeed still that largest and most fruit-laden tomato plants in the garden. But I’m happy to report that the other six are making excellent progress and all show signs of a future harvest in the not to distant future.

On a side note, I’m happy to report that my nine-year-old daughter Amy has really taken to the garden and loves to go out in the evening to hunt for the latest harvest-worthy vegetables. Friday I was out of town and when I got home late that night, the harvest basket was on the kitchen table with about two and a half pounds of cucumbers, squash and peppers. In fact, she loves the cukes so much; they are her new favorite snack food. That’s the good news. The bad news is, she consumes them so fast, I don’t have a chance to weigh them first. But I love the tradeoff and I’m thrilled she’s enjoying the experience and a newfound love of fresh, homegrown organic vegetables, fresh from the garden!

Episode 13 will be out later this week covering super money saving ideas for fertilization and plant ties. See you back here soon.
JL

p.s. The harvest in the above picture was from this evening, weighing in at 3 pounds, 9 ounces. That puts the total harvested weight so far at over 27 pounds.