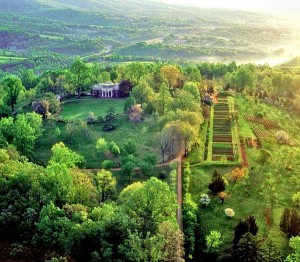 I’ve always been fascinated by Thomas Jefferson, mostly for the same reasons most people feel that way. But the real hook was set for me when I started learning more about him as a gardener. And the more I learned, the more I had to know. Thankfully he did a great job documenting his gardening life. His 700-page book, Thomas Jefferson’s Garden Book is a testament to that! I knew he had me when I read the whole thing in two days!

This was a garden I had to see firsthand and fortunately, his primary laboratory for all his horticultural trials was just a short road trip away in Charlottesville, Virginia at his famous Monticello. But there was no point going to see this alone. Bringing the GGW crew to tell his story as a pioneering organic gardener made perfect sense. But little did I know how hard it would be to pull this off.

Our first attempt was a bust. Due to weather delays and the associated domino affect on flight schedules, only half of our crew made it to Charlottesville for our scheduled shooting day. It was a costly decision but one that I had no control over. The cameras, our shooter, and me, were still in cities far away, with no way to arrive on location in time for filming. 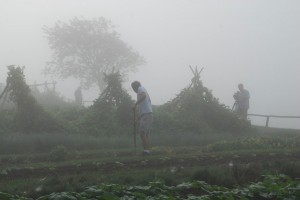 The fog, although beautiful, is not necessarily a producer's best friend

One month later, on a hot August day, we were successfully back together and finally in the garden. Like all shooting days, I love to arrive before sunrise to any location to capture that magical morning light. This day was no different, with the exception of one thing: fog, heavy, thick fog.

It lingered for hours. In fact, it didn’t dissipate until after 9:AM. By then, precious time had been lost and a full day of shooting still loomed ahead. The producer in me was not happy. We knew it was going to be hot and we had hoped to record much of our interviews by now. That was not to be. Although the fog did lend itself to some incredible images and spectacular video that we used in the show, from a productivity point of view, it was not my friend. 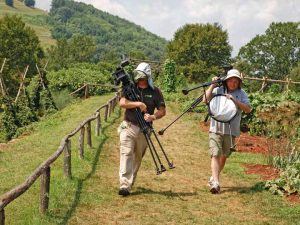 As the blistering summer sun finally burned though the fog, the heat was already talking its toll on our crew. Director of Photography, Carl Pennington spent much of the day donning a large cover over his head that we use to hold our collapsible reflector, and by mid-day, co-host Patti Moreno even had a first of the season wardrobe change.

By the end of the day, our dedicated crew pulled off yet another feat, completing what turned out to be one of our favorite episodes of the year. With the natural beauty and history of Monticello, combined with the great guest hosts in Peter Hatch and head gardener, Pat Brodowski, the show was packed with history of Jefferson’s gardening life, beautiful to watch and we even managed to throw in a couple DIY segments.

All’s well that ends well, and this day was certainly worth waiting for. All in all, a very good day indeed.