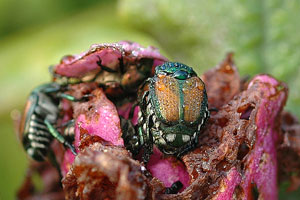 A non-native pest to the U.S., Japanese beetles have no natural predators

The handsome but unpopular Japanese beetle is loathed by just about everyone. As the name implies, it’s an import, arriving in the United States by way of New Jersey in 1916. As with many non-domestic pests, the natural predators that keep these pests at bay in their native land are not established here. This explains why the beetles are able to proliferate so easily here.

Japanese beetles are easily identified by their looks and the damage they leave behind. The adult beetle is only about 3/8” long. It has an attractive copper metallic outer shell with a bit of green florescence. The abdomen has five tufts of white hair on each side of its body, its most identifiable sign.

Most of the damage you notice is above ground, occurring on over 300 types of plants and trees. The adults eat flowers and skeletonize the leaf tissue between the veins, leaving behind little more than a lacey reminder of what once was.

The first to arrive on your plants release an odor that attracts more adults. It then becomes a big group effort. The damage starts at the top and they work their way down.

The life cycle of this pest takes about a year to complete so the beetles that eat your leaves this summer, were eggs nearly a year earlier. As the adult beetles feed on leaves in summer, the female heads down to burrow into the ground or turf many times to lay eggs. By mid August, she’ll lay a total of up to about 60 eggs. Those eggs hatch in less than two weeks to begin life underground as a larva.

You may recognize them as white grubs about an inch long when fully grown and lying in a curled position. For about 10 months of the year, they spend their life underground. This lasts until they pupate and emerge as adults two weeks later, typically late next spring or early summer.

During the fall and spring, those lifeless looking grubs are actively feeding on the roots of turf-grass and other various plants and organic matter. At home, you can suspect the results of grub damage in your lawn when you notice dead patches of turf that can be lifted up like pieces of loose carpet.  Today, the Japanese beetle grub is the most prevalent turf-grass pest in the United States, destroying home lawns, golf courses, parks, and more.

Methods of Controlling the Adult Beetle

So how to control Japanese beetles? First off, know that they’re here to stay. You won’t be able to eliminate them forever. Instead, learn to manage them. They can fly in from as far away as five miles but more likely they’re coming from a closer distance. In either case, whatever you do on your own property is a temporary solution to a much bigger issue.

Through a process called IPM (Integrated Pest Management) the following are some methods to control adult beetles, starting with the least environmentally impactful method first. So in the spirit of IPM as our guide, here are the most common approaches.

Hand picking is easy and very effective when populations of beetles are small. A jar or bucket of soapy water in hand during an early morning stroll in the garden can be quite productive as reducing beetle populations. Simply knock them into the container. They won’t be coming back out. This daily exercise can be very productive.

Trapping pertains to those yellow Japanese beetle traps with bags you find at the home improvement stores and garden centers and see in many of your neighbor’s yards and gardens. The truth is they work very well at attracting the beetles to the traps. The problem is they work too well. Study after study shows that they attract far more beetles than they catch. Consequently, they can actually draw more beetles to your yard than if you didn’t use the traps at all.

Chemical insecticides are available that kill adult beetles (and many other insects as well). Two of the more common choices include carbaryl found in the product Sevin and acephate found in Orthene. Active ingredients such as these can be found in many different product names. I’ve just listed two of the most common.

Unfortunately chemical controls such as these are non-selective. They are very effective in controlling pests but can kill just about any insect that comes in contact with it, including beneficials and pollinators. If you resort to these control measures, please exercise appropriate care. Be sure to apply late in the day or evening and when winds are calm to minimize the adverse impact on beneficials.

Before you make the decision to attack your beetle problem from the ground, realize that your lawn or landscape may not be the problem and grub populations may be low there. Testing a few areas around your yard is the first step to even see if you begin a control program. The best time for this exercise is while the grubs are near the surface, during late summer and late spring.

Cut out a 12 x 12 x 3” deep section of your lawn. Turn it over and inspect the root area and soil below for grubs. If you count 10 or more grubs per square, treatment is worth considering.

The most familiar methods of dealing with lawn grubs generally is to find that big bag of granular ‘grub control’ at the garden center or home improvement store. There are a number of chemicals used to treat grubs synthetically. These can be very effective but also know that when used improperly, these and other insecticides can pose a serious hazard to wildlife, other beneficials, the environment, and people.

Because of these concerns, many experts believe a better alternative for turf insect suppression are biological controls. These methods effectively incorporate the use of bacteria, nematodes and parasites. These are ways to achieve similar results without many of the risks posed by traditional methods, including beneficial and non-targeted organisms. Although these methods may take longer to achieve the same effectiveness, they will last longer in the soil. A partial list of some of the most popular are listed here.

Milky Spore: You find this product listed by its common name. The active ingredient is the spores of a bacteria called Paenibacillus popilliae (formerly Bacillus popilliae). This product can be purchased from Arbico Organics in either a powder application (best for the garden or farm) or as granules (best for turf). It is selective and harmless to people and other organisms. Milky Spore has been most effective in the Eastern United States.

When the grub dies, a billion or two more spores are released back into the soil where they continue to increase the population. It takes 2-3 years to achieve effective suppression. The best results are achieved when used in a neighborhood-wide campaign. During this time, other insecticides to control grubs in the soil should not be used as they can interfere with the population build-up.

Bt: (Bacillus thuringiensis) is also a bacteria-specific to larvae and grubs of the Japanese beetle and others. It must be ingested but is then very effective. It is also a good choice because it will not harm non-targeted organisms. This is applied like other insecticides. Particular strains of Bt proteins are host-specific, so it is important to use the strain of Bt that targets a certain pest.  You may not find this readily at garden centers, however, there are online sources that offer specific Bt strains.  Gardens Alive sells a Bt product called beetleJUS!® which contains Bacillus thuringiensis galleriae. This strain is reportedly effective against both the adult and grub forms of Japanese, Asian, and Oriental beetles.

Parasitic nematodes are probably the newest biological control method to become commercially available. Nematodes are microscopic worms that feed on specific organisms. Some target the Japanese beetle grubs. Your success in finding this product in gardening stores may be limited so I suggest an online source such as Arbico Organics to locate these. Two strains have been identified as being most effective; Heterorhabditis bacteriophora and Steinernema riobrave. These two types of beneficial nematodes are sold by Arbico Organics as a product called NemaSeek®. Nematodes are typically applied with water. Use when the grubs are small, in late summer or early fall. Be sure to irrigate before and after application.

For a more in-depth discussion about the benefits and science behind nematodes as pest control, be sure to listen to my podcast episode – Understanding Nematodes: Microscopic Worms, Friend or Foe of Your Garden – with Dr. William Crowe, a professor of Entomology and Nematology at the University of Florida

These methods are exciting alternatives to dealing with grubs. Biological control methods are a great option for dealing with a number of pests and should be considered as a first choice next time you seek ways to manage populations in your lawn or garden.

Overall, total control of Japanese beetles is not yet an option. More methods are currently being evaluated and exciting, safe options are becoming more available. Until then, exercise tolerance, restraint, and practice IPM in your pest management program. It will make your life easier.