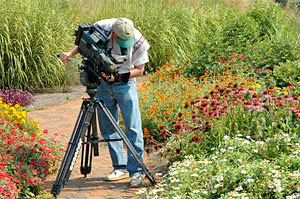 We’ve kept the “G” in Growing a Greener World TV

There have been quite a few lively discussions going on in the gardening blogosphere  about the lack of quality garden-related programs on HGTV, DIY and others anymore. My blog (Compost Confidential) along with two of my favorites, Garden Rant and Red Dirt Ramblings (I’m sure there are others), have also addressed this less than obvious trend in the decline of real gardening on television anymore.

Having spent the last seven years in garden television personally, I’ve gained a new perspective on what goes on behind the scenes in determining the type of programming that ultimately hits the airwaves. We often fail to realize, with the exception of PBS, television production is a for-profit business. And like any other, that “P” word drives much of the decisions that are made. In this case, it’s what to air and what not to air, driven in large part by advertisers and the audience they are trying to target. As a businessman, I get that.

Real gardening shows just aren’t attracting as many generation X and Y and I.M (Instant Messaging) viewers as the networks and advertisers would like. If and when these impressionable viewers are sitting down to watch something, better make it quick. Make it bold too, over the top big. Makeover shows crowd TV time these days and Extreme Home Makeover tops the list. It’s got all the right components; a young, energetic hunky and sexy team of hosts, a great ‘feel good’ story and plenty of action. Tearing down, removing and rebuilding a new house in a week is about as good as it gets to stimulate all the senses. Count me as a fan too.

More importantly, it’s shows like these that are nailing the strike zone for advertisers. They have a dream, multi-generational viewing audience, prime time slot, and unlimited appeal to companies wanting to showcase a plethora of products. Which leads me back to my point of gardening television as it relates to advertisers. Think about the relatively small pool of businesses that see gardeners as their sweet spot, target audience. Television advertising is expensive. Given limited marketing dollars, if you were in charge of spending those dollars as efficiently as possible, you’re going to look at every option before committing those funds.

For example, take scenario number one. You’re the media buyer for Big Box Store with instructions to spend some of that money at HGTV for commercial time. Big Box wants their ads on the shows that their target audience is watching. It’s a simple matter at this point of picking the most appropriate fit; makeover or gardening?

Now, assume you’re still the buyer and your target audience is still the same. But now, the show they are watching is on The Learning Channel. So, are you buying time at TLC or HGTV? Lastly, put your shoe on the other foot. Assume you’re the executive at the network who is losing ad revenue because you’re not airing the content that the advertisers want. What do you do? The obvious answer; deliver the content the advertisers want, of course; makeover or gardening?

Notice in all of this media buying / network programming speak I speak of; nowhere is the viewer mentioned. An oversight? I think not. Indeed, the viewer has some say. If the program wasn’t appealing, no matter what the genre, it wouldn’t be on the air for long. Great programming is still the key to getting airtime, but advertising dollars are what pays the bills, keeps the lights on and ultimately drives the show’s longevity. Programming directors must consider both sides, but in the end, if you’re a “for profit” network, which show are you going to air; makeover or gardening?

So is there an answer? Well I think so. Your voice, and the power of your wallet matters; to the network and to the sponsors of those shows we loved and now miss. They should be hearing from us too. We all need to let them know that gardening is alive and well and so is the audience of shows about this great American pastime.