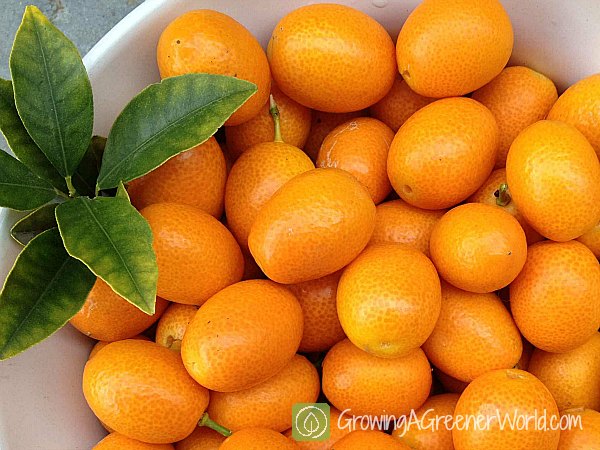 Living in Southern California with citrus trees and a mom who canned, I grew up experimenting with all kinds of homemade citrus marmalade. In fact, it was not until I was an adult that I even tasted a store-bought variety. What a disappointment THAT was!

Homemade marmalade is so much better than store-bought because the handcrafted version lets the subtle layers of citrus flavor shine through. The flavor just…pops!

Know the Truth About Marmalade:

If you are ever given a jar of marmalade, treasure it – not only for the delicious flavor but for the time someone put into making it. In the canning world, marmalades are a precious commodity and with good reason. They require a bit more of a time commitment than the average jam because you have to slice the citrus peel into tiny pieces.  Yes, you can use a food processor, but some traditionalists feel that is cheating. I don’t feel that way – The flavor is the same no matter how you slice it! But there is something special about a hand-sliced marmalade with the perfectly thin pieces floating in the mix. 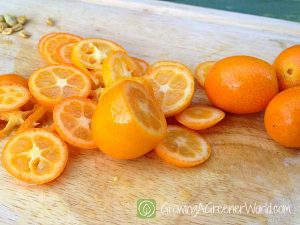 Slicing kumquats is time consuming so do it in stages or ask a friend for help to make it fun.

But Kumquat marmalade is different. You can’t “cheat” the slice on this one. It must be done by hand and it is time consuming.

Now I don’t want to discourage you! I only tell you this because most marmalade recipes never say a word about the time! They just give you the recipe and never mention that hand slicing takes a long time.

Many a canner has rued the day they started a marmalade because they didn’t allow themselves enough time or felt duped. And for this reason, marmalades have gotten the reputation of being “difficult”.

But Marmalades Are Not Difficult:

But fear not! If this is your first time canning, this marmalade is not difficult or complicated. It does take a long time for one person to slice all the kumquats by hand. I handle this by slicing one day and then soaking the slices overnight to soften them. I make the recipe the next day. It doesn’t feel so daunting that way.

If you don’t like the idea of slicing alone, I highly recommend that you ask a friend or two to come help. It cuts the time drastically and chatting while slicing will link your jars to a wonderful memory. Of course, this does mean that you have to share the finished jars – but it’s a win-win!

One important point I want to mention here is that all citrus marmalade should be made with organic fruit because we are eating the peel. Some states allow the non-organic fruit to be sprayed with a non-food grade dye (because they do not consider the peel to be edible) and who knows what else the fruit can be sprayed with. You don’t want that or any non-organic spray on your citrus. So use organically grown citrus and be sure to rinse all the citrus well before using.

There are are few other tricks to making marmalades and if you would like to learn more and get and an orange marmalade recipe (instead of kumquat), go to The Secrets of a Good Marmalade where you can dig a little deeper.

And one last hint: Kumquats only ripen on the tree, so don’t pick them until they are at their peak on the branch.

This is a larger marmalade recipe because I feel that if I’m going to do this, I only want to do it once. So I make a big batch.

1) Rinse and dry the kumquats. Slice into thin circles, pulling out the seeds as you go. Reserve the seeds until the next day. They hold a lot of the pectin (which helps makes the gel) and you will be tying them into the cheesecloth and cooking them with the fruit.

Handy-Hint: On a kumquat, most of the seeds are in the blossom end of the fruit (the end opposite from where they attach to the tree). If you make your first few slices on the blossom end, you can more easily poke out the seeds and then continue slicing. It saves a bit of time. 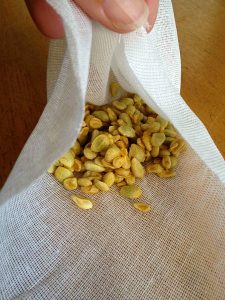 2) Place the slices in a heavy-bottomed pot with the water over medium-high heat. Bring the mixture just up to a simmer and stir well. Then turn off the heat and cover. Let the mixture cool before putting into the refrigerator to soak overnight. (This helps soften the peel).

3) The next day, securely tie the reserved seeds into the square of cheesecloth using the string. (Make sure to double knot it so the seeds to not escape.) Add that to your heavy-bottomed pan of citrus.

4) Add your sugar, lemon juice and spices and bring the mixture up to a boil over medium heat. Stir frequently to prevent scorching. Reduce heat slightly and allow the mixture to simmer for about 20 minutes

5) Meanwhile, prepare your waterbath and warm up your clean canning jars and lids. (See Waterbath Basics for more information.)

6) After 20 minutes, it is time to start checking the gel. You can do this using the wrinkle test or a candy thermometer. (See below) 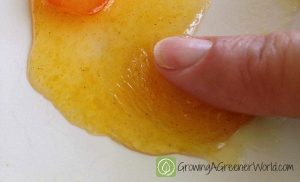 The “wrinkle test” lets you know if the jam or marmalade is ready.

Wrinkle Test: Place a spoonful of the marmalade onto a chilled plate and set it into the freezer for 2 minutes. Then use your finger to press into it from the side. If it wrinkles, it is ready to can. If not, keep cooking and try again in a few minutes.

Temp Test: If you have an accurate candy thermometer, the marmalade is ready when it reaches 220 degrees F and you hold it there for 1 minute.

7) When you reach the gel stage, turn off the heat and remove the seed bag. Then skim off any foam. Let the mixture rest a few minutes while you get your jars ready. (This allows the mixture to thicken a bit and prevents all the peel from settling in the bottom of your jars.)

8) Fill your jars leaving a ¼-inch headspace. Wipe the rims with a damp cloth and apply 2-piece canning lids. Process the jars for 15 minutes in a waterbath. Remove, let cool, check the seals and label. Store sealed jars on the pantry shelf. Store unsealed jars in the refrigerator and eat within 3 weeks.

And later – enjoy that summer flavor long after the season is over! 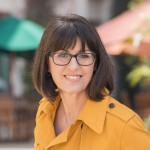 Theresa Loe is an award-winning garden writer for television, print media and video. She is also one of the founding producers of Growing A Greener World, bringing her voice and expertise both on-camera and behind-camera from day one. She is passionate about taking the garden full circle (from seed, to pantry, to table) and shares how to capture seasonal, fresh-picked flavor.