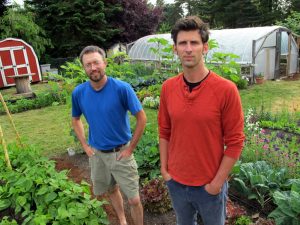 Part of what’s so cool about this local-living movement is all the new cottage industries cropping up as a result that involve food and gardening. Our Episode 219 featured the story of two such localpreneurs on opposite sides of the country.

In Seattle, Colin McCrate and his business partner Brad Halm operate Seattle Urban Farm Company. If you want to meet the epitome of two laid-back dudes, Brand and Colin are poster boys for living easy. I’m not sure if that’s just the Seattle lifestyle talk’n, or the fact that they spend their days working in and designing gardens; likely it’s a combination of both. We spent a beautiful Sunday filming their story. The interview and garden you see are from Brad’s backyard, which also doubles as their working test garden and home base for business. Our day of filming with the guys was smooth and uneventful—just how we like them. We have very few filming days like that. 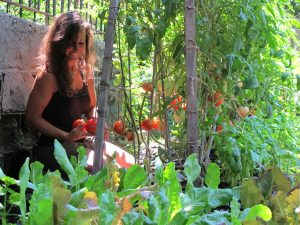 Take the other half of this episode for example. Stacey Murphy is the founder of bk farmyards in Brooklyn, NY. With degrees in Mechanical Engineering and a Masters in Architecture, this girl runs her small backyard farm plots like I imagine everything else in her life (my kinda girl by the way). In tiny backyards scattered across Brooklyn, Stacey and her team make the most of every square inch, turning overgrown, weed infested neglected spaces into thriving food gardens. That part you get from watching her segment of the show.

What you don’t get from the episode is a sense of the whirlwind day we had filming this segment. Unfortunately, our schedules didn’t work out to coordinate our time when the GGW crew was in Brooklyn just 3 days earlier. So on the following Tuesday morning, we were on redeye flights from Atlanta to NYC, in a cab by 8:30. It sounds good so far except for the fact that Stacey thought we were going to be on location and ready to go by then. Unfortunately, getting into Brooklyn from LaGuardia is not an easy task, especially when the cab driver really has no idea where we need to go and the GPS isn’t pulling up the address! This is not how I want to start the day. 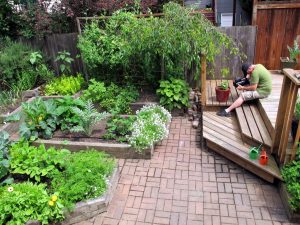 Even on a good day, 7 miles on the map is a 90-minute trip by car. Add in rush hour and an unknown address and you can see where this is going. We finally arrive about two hours later but now we have less than that to film half a show, when Stacey informs us she has to leave by noon for another appointment! Fortunately, we had a very small location to shoot, a tight storyline and Stacey is an experienced guest that has told her story many times. By noon, she was pedaling away and we were packing our gear.

The filming gods were with us this day. With so much that could have gone wrong and so little time to fix any problems, we managed to get what we needed in record time. What a contrast to how these stories were recorded and even with the farmers themselves. But how cool to know there are people like Stacey, Colin and Brad, and so many others making backyards across America more productive and accessible for organic and locally grown produce.

Watch the full episode that this blog post accompanies, 219 Locavores and Yardsharing.