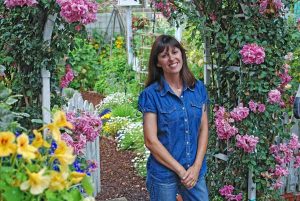 Near the Los Angeles International airport and surrounded by a concrete jungle, an oasis grows on less than one-tenth of an acre. Theresa Loe, aka “Tloe” is living homegrown fresh every day of the year. It’s not only her branded tagline; it’s really how she lives. Not only was she the guest-host for this episode, she’s also the associate producer for Growing a Greener World. Walking the talk when you work with us is expected. Theresa just happens to take that to a new level.

The idea for a show like this was perfect. Making the most of an urban small space garden is a challenge no matter where you live. But leave it to Tloe to show us how to take advantage of every square inch. And the fact that this show was in her own backyard, literally, was a huge plus. 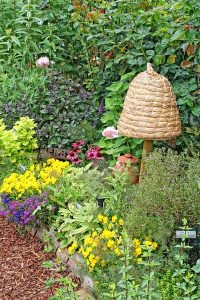 On the day before the shoot, my crew arrived with plenty of daylight to spare. So not wanting to miss any opportunity for extra footage, I sent them over to Tloe’s house to start rolling the cameras. (Note to self; don’t ever send your camera crew over to someone’s house a day before the scheduled shoot, even if they are on your staff…it’s like showing up two hours early for a date. It’s not pretty!). Even though she’s a very buttoned up kinda gal, she’s also a perfectionist when it comes to her garden, and the rest of her life for that matter. Our cameras arriving early certainly put a kink into her plans for final tweaking. But with her ever-present smile, she allowed the boys in to do their thing while she went about her final preparation. By the time I arrived later in the day, she was ready for the tour.

Theresa’s strength with gardening in a small space is with how productive she can make her garden while keeping it totally beautiful as well. She plants edibles in drifts rather than long straight rows. She takes advantage of vertical space by planting numerous fruit trees against her walls and fences using the technique of espalier. Containers of edible ornamentals abound at and above the ground. 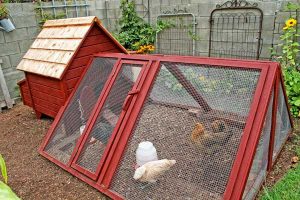 Check with local ordinances before adding livestock to your urban landscape

And speaking of chickens, they were the real stars of the show this day. Charlotte (already famous before we got there) clucked on cue and the rest of the ladies performed their egg laying duties masterfully. The chickens are the faithful producers of plenty of eggs while minding their manners in this dense urban neighborhood. They’re also great for natural pest control and a fantastic supply of organic fertilizer.

For the few things Theresa isn’t growing in her garden, she goes to all the farmer’s markets in her area. We took our cameras there too and enjoyed watching our own chef Nathan Lyon show us the ropes of how to shop wisely whenever visiting a farmers market. Theresa put back on her producers hat and kept us all on track. It was a great day and a fantastic episode for telling the story in an encouraging way, of creating a bountiful garden in a very small space. Living Homegrown Fresh indeed!