By the time we finish editing our shows that you see on television or online, they’re very well mapped out.Yet even in the final hours, it’s not unusual for us to make some significant changes. From concept and completion, it’s always interesting to see how the show evolves as we think about the episodes we’d like to create, to what actually becomes the finished product. This show was a good example of that. 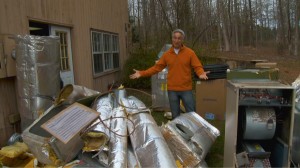 Joe looks at what it takes to transform a home to be more energy efficient.

The idea for this episode came to me as I was dealing with my home HVAC system, circa 1985. It finally decided to give out for good, the first winter after we purchased this house (of course). I knew based on the age of the equipment, surely a lot has changed in their efficiency as it relates to energy consumption. And since our show is mostly about how to live greener outside, it only made sense to start featuring more ways to do that inside the house too.  And so a show idea was born.

Since it is not everyday that one finds the need to research the latest and greatest in home heating and cooling technology options, I was sucked into the vortex of hours of research and meetings with company sales reps. The choices became easier and easier as I stuck to my main goals of getting the most energy efficient system for my budget. Because of that, I learned a ton and ended up with a great system from Carrier and a pretty unique angle for our show as we bring you into my home to learn about some of the most important issues when seeking the greenest solutions. In the end, I had a great new system and I’ve seen a significant improvement in my energy consumption! If you really want to know the details, our show notes  for this episode tells it all. 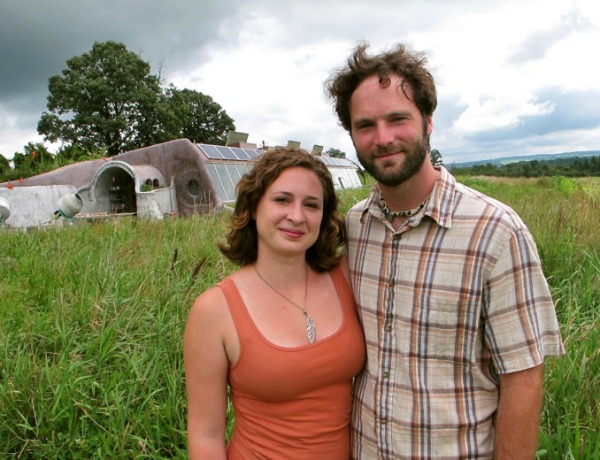 Chad and Courtney DeVoe live in a home completely off the grid.

As happy as I was to be warm and toasty again, the other half of this episode takes energy efficiency to a new level. Living off the grid is a topic we slated for it’s own episode. And in hindsight, we wished we had stuck to that plan. The home we found, thanks to my trusty assistant, Sarah, was everything we wanted and more. As we scoured the web, we kept coming back to one upstate New York Earthship (yes, that’s what they’re called), that was not only a great example of self-sufficiency, but the couple behind it, Courtney and Chad DeVoe were just as interesting. 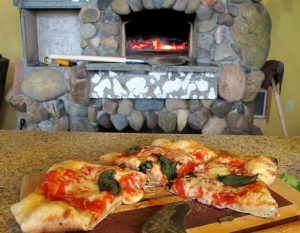 Best pizza we ever had!

Even better, the pizza they made for lunch was the best I’ve ever had! I can’t stop thinking about it. Everything was made from scratch, from the wood-fired oven, to all the ingredients that went into the pizza, topped off with fresh basil picked from their indoor garden. If you haven’t already, be sure to check out the episode and notes here to see what we saw. And if you’re so inclined, their Freeville Earthship is also a Bed & Breakfast. I bet if you ask nicely, they’ll make you a pizza. I highly recommend it!