The expression; “out of sight, out of mind” could easily apply to mistletoe, since it thrives in the tops of the dense tree canopies of its host. Therefore, it’s rarely seen for much of the year. But in the fall after the trees lose their leaves, this shrubby evergreen can be easily observed growing on the upper tree branches. 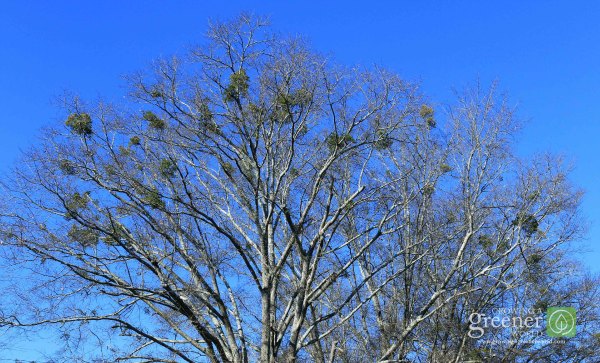 Here in the states, our ritual stems from European mistletoe (Viscum album), which resembles American mistletoe. In Norse mythology, a Norse goddess declared mistletoe sacred to symbolize love. This led to the tradition of kissing under the mistletoe.

In the 18th century, mistletoe was hung during holiday festivals and men would steal kisses from women under it. One berry was removed for every kiss received. When the berries were gone, so were the kisses. Yet beyond this timeless tradition, I suspect most of us take for granted the backstory to this fascinating and very real plant.

It is also prominent in Druid and Nordic mythology. Celtic Druids considered the plant sacred and used it as a fertility symbol in ceremonies. They hung the plant over windows and doorways to ward off evil.

Native Americans used the plant in various ways including as a remedy for toothaches, rheumatism and to treat wounds.

The common holiday mistletoe known as American (or oak) mistletoe (Phoradendron leucarpum) is harvested in the wild mostly from Oklahoma and Texas to sell during the holiday season, but in America, it’s native to about 26 states. Its range extends from southern New York south to Florida, west to New Mexico, and northeast to Kansas, Missouri, Illinois, and Ohio.

As an evergreen semiparasite, it roots beneath the bark of the host tree on branches and trunks, and creates its own food through photosynthesis. But it obtains water and nutrients through modified roots that penetrate the bark of its host. Although the genus Phoradendron literally means “thief of the tree” referring to the belief that mistletoe is robbing something from its host, mistletoe causes little harm to its host tree.

The word “mistletoe” comes from the Anglo-Saxon words for “dung” (‘mistel’) and the word for “twig” (‘tan’), which appropriately describes mistletoe’s origin of sprouting where a bird leaves its droppings. The berries are a favorite of the mistel thrush.

The sticky white fruit is poisonous to humans, but desired by birds such as robins, thrushes, bluebirds, and cedar waxwings. Birds spread the seeds by eating the fruit and eliminating them through their droppings and by wiping the sticky pulp off their beaks onto branches where new plants begin growth.

So there you have it. More than you wanted to know about mistletoe. But now that you do, feel free to use this timely and helpful information next time your holiday party conversation hits that awkward moment of silence. We’ve all been there. You can thank me later.