Although organic gardening may be considered a shift in thinking to modern agriculture, it wasn’t too long ago that ALL gardening was done without chemical fertilizers and pesticides. However, the connection between soil and plants has not always been easily understood.

One forward thinking gardener of the past also happens to have been one of the forefathers of our country – President Thomas Jefferson. He was a great plantsman and used his garden to test agricultural theories that we still apply today. 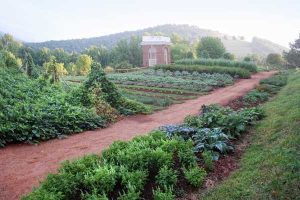 As a gardener, Jefferson wasn’t afraid to fail. He confessed often in his writings, to failing in his garden. There were many pest problems, as well as irrigation problems. He had to use trial and error to figure out what was the best direction to go when he encountered a problem. He said, “The failure of one thing is the repair and success of another”.

On this episode, Joe heads to Monticello, the home of Thomas Jefferson in Charlottesville, VA during the local Heritage Harvest Festival.

This yearly festival is a family oriented and educational event held on the grounds of Monticello that celebrates gardening, sustainability, local foods, and the preservation of heritage plants. The Heritage Harvest Festival celebrates a gardening president and organic plantsman.