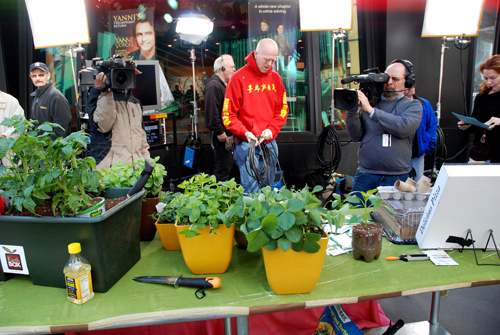 It's been a very hectic travel schedule lately and some of that includes coveage of my Twenty-five Dollar Victory Garden Challenge. This included another trip to NYC for my next chance to tout the virtues of starting and growing a vegetable garden on the cheap. Much to my happy surprise, this segment was given a whopping six minutes on national television! That's amazing since four minutes is just about the maximum any segment gets, no matter what the topic. The picture above was moments before doing the live segment, from my perspective as we faced the cameras. The interesting thing about this segment was that we did it outside of the studio, right on the corner of Time Square. 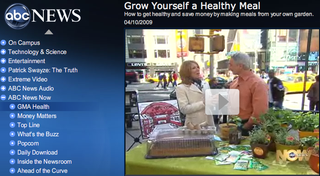 So here's my huge THANK YOU to ABC for the wonderful opportunity you're giving your audience to learn more about growing their own food, and especially for giving me the chance to share my story on how to do it on a very limited budget. If any of you reading this have a moment to drop ABC a note to let them know you too appreciate what they've done to promote growing your own food, I'd very much appreciate that and it lets them know we want more stories like that. Here's the link to send an email, and thanks!

This week I'm catching up on the family time and  it's been back to preparing the actual garden where I will grow all these plants. The seedlings are coming along nicely but they need a place to grow outside and I still have a lot of work to do there before the garden is ready. Yesterday, I had some people I met on freecycle.com come remove the gravel mulch (from previous owner) that has covered the area I need for my garden. I also had a taker for the plants that I'm removing from there also. The problem is, they had such deep roots, I was unable to remove them. Now it's on to plan "B" for extraction. The only problem is, I don't have a plan "B" yet. In the mean time, you can see video of the outside garden area and my unsuccessful attempts to remove these plants in my next post.