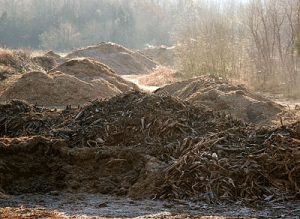 All mulch is not created equal; understand the source from which it came

Yes, it’s true. I’m a big fan of mulch. I always have been. And the more I learn about all the direct benefits, the bigger fan I become. Recently I took a day to explore the small town where I now live, to scout out what would become my new sources for plants, soil amendments, landscape supplies and of course, mulch.

When I arrived at the town’s local source for these products, my heart raced. I could see in the distance, mountains of what appeared to be well ground and thoroughly composted mulch — black gold as I like to think.

To the workers that day, I must have looked like a hungry dog, trying to contain my excitement at the prospects of getting one tiny morsel of steak, tossed my way from the Sunday dinner table. In fact, it was either the saliva running down my chin or the obvious overall excitement, but no matter; the proprietor offered to drive me down to the mulch piles in his truck for a closer look.

Did I mention that it was cold and raining? I barely noticed, but in hindsight, it was no surprise that the driver stayed in his truck with the heater blasting. Upon inspection, I saw what looked to be exactly what I was hoping for; a nice combination of coarsely ground branches, sticks and leaves, composted and ready for my garden…or so I thought.

I asked my host how he was able to create such a massive and endless volume of product. He proudly went on to explain that he had many sources: the City delivered waste from fallen trees and such, landscapers and weekend warriors offloaded their accumulations of a hard days work, etc. But then he went on to say something that took me back.

In addition to these ideal suppliers of raw material, there were others that were not as attractive – to me anyway. Some of this mulch was the remnants of former decks, play sets, fence posts and pallets. What I heard was lots of treated wood, chemicals, paint, varnish, etc. All that translates into four letter words if you speak organics!

As a gardener trying to be as organic as possible, sadly this mulch source was no longer an option. It was no coincidence that about that time, I suddenly noticed the rain and how cold it really was. I had just had the equivalent of the proverbial wet blanket thrown over my back. What an eye opener!

Some would argue that any chemicals at this stage of the process were already leached out or that it’s better to recycle this wood into mulch, rather then burn it, adding to the air pollution problem. And there is some truth to both statements.

Frankly, I don’t have the space to give you the answers to a better alternative here. However for me, I am much more cognizant of where my mulch is coming from. And hopefully, maybe you will be too. Ideally, make your own. It is surely the best and safest way to know the true source of what is going back into your garden and into your soil.